Gleaner Company honours 26 of its pensioners 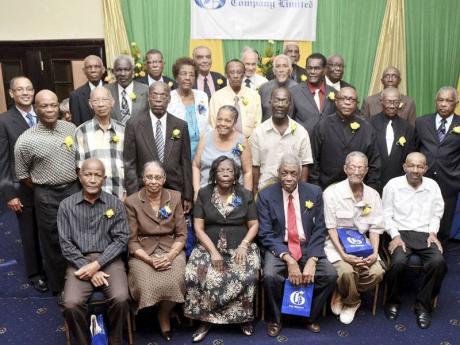 Christopher Barnes (back row, left), managing director of The Gleaner, joins 26 of the company's pensioners during the annual pensioners' luncheon at The Jamaica Pegasus hotel in New Kingston yesterday. - Rudolph Brown/Photographer

The accolades came faster than copies of the newspaper roll off the press.

Yesterday, The Gleaner hosted some of its retired stalwarts during its annual pensioners' luncheon at The Jamaica Pegasus hotel in New Kingston.

Twenty-six of The Gleaner's 45 pensioners were honoured for their varying years of service to the company, just The Gleaner's way of showing it really appreciated what they had done for the newspaper, founded in 1834.

The guest speaker, PROComm's Jean Lowrie-Chin, a former Gleaner worker, was exuberant in her praise of the work put in by the retirees.

"You, The Gleaner's pensioners, have been pillars of this venerable institution. And it is really because of you, sterling individuals who have built this country, that we were inspired to found the Caribbean Community of Retired Persons (CCRP)," said Lowrie-Chin, referring to the organisation for which she is chief executive officer. She gave the veterans tips that have been passed on to the CCRP's members.

"Maintain mental and physical health. Avoid disease and disorders, remain active and independent," she advised. She reminded them that they are not withdrawing from life and should view retirement as a whole new stage.

"Youth may be a gift of nature but age ... is a work of art," she said. Lowrie-Chin said she had a vision that the retirees, who had helped to build this nation through their sacrifice, would have a safe and harmonious retirement and that their legacy would be honoured.

She cited that the elderly population was growing and opined that they still had much to give to Jamaica.

"We have allowed too much negativity to overwhelm us. So let us renew our faith in ourselves and feel the strength in our numbers. We have the power to make the change. Let us be a strong voice for the seniors of this country," she urged.