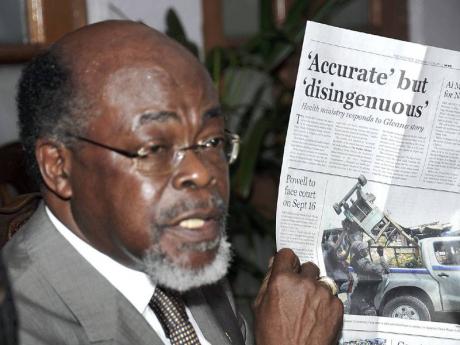 Below is a statement from Public Defender Earl Witter.

THE GLEANER of Saturday, March 24, 2012 reported on page one that the public defender had described as "remarkable" the fact that no member of the Jamaica Constabulary Force "who was involved in the shooting death" of 16-year-old Vannessa Kirkland had been charged. In that respect, The Gleaner report of comments made by the public defender at a press conference the day before was seriously inaccurate.

As the remainder of the report tends to make clear, what the public defender found "remarkable" was the fact that none of the occupants of the relevant blue Suzuki Swift motor car had been arrested or charged and/or named 'a person of interest'.

The public defender's comments, (made in response to a question posed by a television reporter) were made in the context of and against the background of published accounts put out by the Constabulary Communications Network or relying upon other police sources. These reports suggested that:

i. Occupants of that vehicle had robbed persons in Portmore of cellular phones and other property;

ii. The vehicle was chased by the police and citizens, but managed to elude both;

iii. The vehicle was subsequently spotted on the Washington Boulevard and trailed to Norman Lane, off the Spanish Town Road, where there was a "confrontation" and "shooting incident" in which Vannessa Kirkland was killed and other persons injured, some of them hospitalised. One had since been discharged from hospital.

iv. Some of the alleged stolen property, including BlackBerry telephones, were supposedly recovered along with a Taurus .38 revolver, three live rounds and "several" spent shells.

v. The robbery victims had identified their "stolen" property as well as the motor vehicle.

What the public defender found remarkable was that none of these civilians had been arrested or charged or placed under police guard or declared 'persons of interest'. All of the alleged occupants, not remaining in hospital (including the one discharged), remained in their community and none had gone into hiding. These curious circumstances were sought to be explained away by "instructions" allegedly given by INDECOM. He added that he had investigated that allegation and found it to be false.