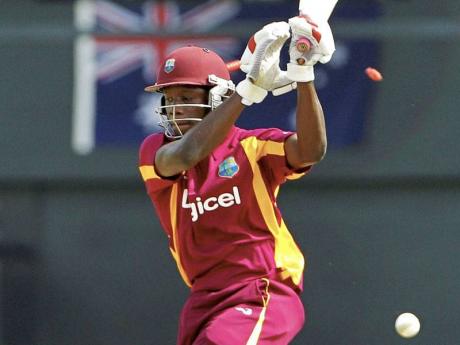 West Indies showed little of the endeavour that characterised the preceding one-day series as Australia romped to an uncomplicated eight-wicket victory in the opening Twenty20 International here yesterday.

The in-form Kieron Pollard stroked a typically robust unbeaten 54, the fastest T20I half-century by a West Indian, but the Windies still struggled to get up to 150 for seven off their 20 overs.

They were pegged back by seamer Daniel Christian, who took three for 27, and veteran speedster Brett Lee, who finished with two for 30.

West Indies then lacked firepower up front, allowing Australia's batmen to revel in superb conditions at the Beausejour Cricket Ground and cruise to their target with 11 balls to spare.

Opener Shane Watson helped himself to an attractive 69 while the evergreen Mike Hussey finished unbeaten on 59 to see Australia home.

The Aussies lost the dangerous David Warner to the fifth ball of their run chase without a run on the board, but Watson and Hussey put on an entertaining 108 off 71 balls for the second wicket as Australia snatched a 1-0 lead in the two-match series.

Winning the toss and batting, the home side showed early signs of carrying on from where they left off in the one-day series with openers Johnson Charles and Dwayne Smith playing freely.

Charles gathered 24 from 16 balls, while Smith looked sharp in hammering two leg-side boundaries in 10 before edging a cut at Lee behind at 19 for one in the third over.

West Indies then suffered through the inexperience of Charles and Nkrumah Bonner, who dithered 23 balls over adding 19 for the second wicket.

Charles took successive boundaries off the first three balls of the fifth over from Lee, but missed a swipe at Watson and was lbw in the seventh over at 38 for two; and Darren Bravo's horrible run of form continued when he holed out to deep midwicket for 12 off Christian, after putting on 28 for the third wicket with Bonner.

Eight balls later, Bonner's 33-ball sojourn over his 24 ended when he was bowled by Christian, attempting to change gears. His departure paved the way for the most productive stand of the innings as Pollard and Dwayne Bravo (14) put on a rollicking 62 off 29 balls for the fifth wicket.

Pollard, playing his first T20I for the Windies in two years, got into stride quickly, lifting the third ball he faced for a straight six off Christian. He then tore into left-arm spinner Xavier Doherty, launching him for two fours and two sixes in the 16th over that cost 22 runs.

In the process, Pollard reached his maiden half-century off just 20 balls.

He lacked support, however, as Bravo holed out to long off off Christian at the end of the 17th trying to up the tempo.

Captain Darren Sammy (seven) and Carlton Baugh (one) fell cheaply and Pollard failed to find any late acceleration, as the Windies added just 16 for the last 18 balls of the innings.