Rio Cobre to sweep away rivals 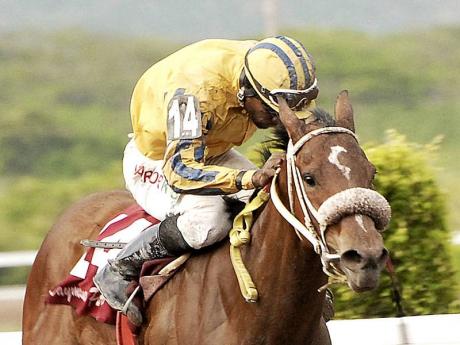 EIGHTEEN KARAT, with Dane Nelson aboard, gallops home for an easy win in a Maiden Condition race over 1200 metres for three-year-old fillies at Caymanas Park last Saturday. - Colin Hamilton/Freelance Photographer

The focal point of interest at Caymanas Park today is the three-year-old and up open allowance to be contested by eight starters.

The round-five race, which offers a total purse of $786,500, marks the seasonal debuts of the talented American horses DANCE SO SWEET and DOUBLE THE HONEY, who both last raced in the None Such Sprint for grade-one horses on October 15 last year, finishing second and fifth, respectively, to subsequent Horse of the Year SAINT CECELIA.

They are among the top contenders, along with the speedy four-year-old gelding SARAGOSSA, to again be ridden by champion jockey Dick Cardenas; and the progressive American four-year-old gelding RIO COBRE, who just failed in his bid to make it five in a row on March 3, when beaten on the line by stable companion JET SETTER over 1200 metres.

Both worked very well together over five furlongs (round) last Thursday morning, clocking a brisk 1.00.3 in a head bob. RIO COBRE looked a bit easier in that workout and this being his fourth race of the season, as against the first for DOUBLE THE HONEY, it follows that RIO COBRE should have his measure, especially with stable jockey Nelson sticking with the ride.

The Gary Subratie-trained American filly, DANCE SO SWEET, needs little introduction. She will be having her first outing in more than five months, has been lightly trained coming into the race and might just need the run.

A bigger danger to RIO COBRE must be the speedy SARAGOSSA, who finished second to him under topweight in a fast-run straight-five race on February 18 and enjoys a healthy 6.5-kg swing today.

Elsewhere on the programme, nine starters have been declared for the Clifford Memorial Cup feature (claiming $250,000-$210,000) over 1200 metres and indications are that victory will go to the speedy REGGAE PRINCESS, who takes a drop in class on the convenient mark of 52.0kg with Paul 'Country' Francis aboard.

The six-year-old mare from the stables of Victor Williams ran creditably over the distance on February 22, finishing a close fourth to TIME OF STORM on a $350,000 claiming tag. With far less to do here, REGGAE PRINCESS should win at the expense of super-fit DOLLA WIN, who bids for his fourth consecutive win with former champion Omar Walker aboard.

I also like LADY MACBETH, to go one better in the first race; THE LEGACY to stave off CUTTER in the third; fleet-footed REDS THOMAS in the fifth; and Peter McMaster's American three-year-old filly, JAH LOVE (Walker up), to catch the well-prepared JARREAU in the sixth at a mile.