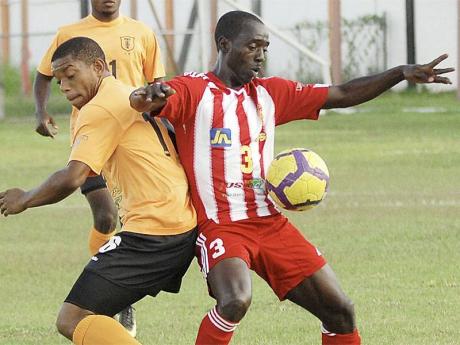 A 19-year servant of the orange-clad west Kingston-based club, Green returned in Highgate's less-celebrated red and white colours to a mixture of fanfare and reproach, looking to show that he could still hold his own against some of the league's best, and probably more important, trying to help his new team's fight against relegation.

Green, who first represented Tivoli Gardens while still a schoolboy, admitted that it was "strange" for him to be playing against his old team.

"It kinda felt unusual. It's something that has never happened before and I didn't really know how to deal with it after almost 20 seasons here (Tivoli), but when the game went on, I managed to overcome that," said Green.

A few glimpses of his old brilliance here and there, underlined by a free kick that had to be saved off the line by Tivoli Gardens midfielder Jameel Thompson, was all that former Tivoli Gardens captain Steve Green managed to conjure up during a sometimes fiery contest.

And there were no favours for the one-time team leader, who was himself on the receiving end of a few crunching challenges from his one-time teammates.

Depite his efforts, Green could do nothing to stop a 0-2 defeat as Highgate's campaign continues to hang in the balance with the St Mary-based team precariously placed in 10th spot, four points above the drop zone.

Far more accustomed to title challenges - having won four national titles with his hometown club - it's not a fight he is accustomed to; but for the 35-year-old midfielder, it's all part of the adjustments that he now has to make.

"I have been adjusting myself, making the most of the opportunity and putting in the work so that we can come out of the bottom three of the points standings," said Green. "We have a 50 per cent chance (of avoiding relegation), all we have to do is keep focused and approach the rest of the season professionally."

A former national representative, Green has not placed any time frame on his retirement from the game, preferring to send a very clear message instead.

"There is a lot more to come from Steve Green and you will see it in the games to come," he said. "I am not 100 per cent as yet, but I am still working hard to get there. I have an injury right now, but I just want to work on that and come back stronger."

One feels that if Highgate are to indeed avoid the relegation, Green will definitely have a major role to play.