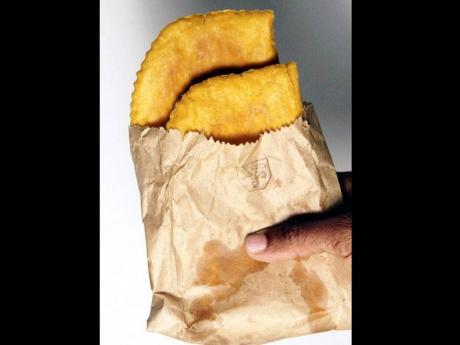 JAMAICA's delectable and mouth-watering patty, once a lunch-time staple and now an anytime-of-the-day meal on the go across all socio-economic groups, has had its international rating bumped up on one of the world's most popular websites, askmen.com.

The patty, traditionally a beef pie in a tender and flaky crust, was rated third among the 'World's Most Delicious Street Foods' by Simon Majumdar, askmen.com's dining and drinks correspondent.

An author, food writer and broadcaster, Majumdar has written two best-selling food memoirs, Eat My Globe and Eating For Britain, and contributes to a wide range of newspapers and websites. He is one of the three recurring judges on The Food Network's hit show 'The Next Iron Chef'.

Commenting on the Jamaican patty, Majumdar wrote in 'Best Portable Food' on askmen.com: "Visit the stunning island of Jamaica, and you will rapidly find, as I did, that people fall into one of two rival camps when it comes to sourcing their favourite portable treat. Everyone is in full agreement that the spicy beef patty is the way to go, but people are capable of arguing all day about where you should buy them."

He added: "I met fierce proponents of the patties sold at both the Juici Patties chain of fast-food outlets and those offered by its competitor, Tastee. I tried both, and all I can tell you is that I would happily offer up a limb or two for either one to be delivered to my door as I write this."

The Jamaican patty was rated third behind India's Kolkata kati roll, "a hot and flaky paratha wrapped around a filling of egg, sharp raw onion, fresh green chili and tandoori meats or fish".

Second on Majumdar's list was the United Kingdom's Cornish pasty, which he describes as an "empanada-like snack stuffed with lamb, onions, potatoes and rutabaga".

The Jamaican patty has over the years evolved to offer varieties such as chicken, soy, lobster, and cheese with beef - a 'cheese patty'.