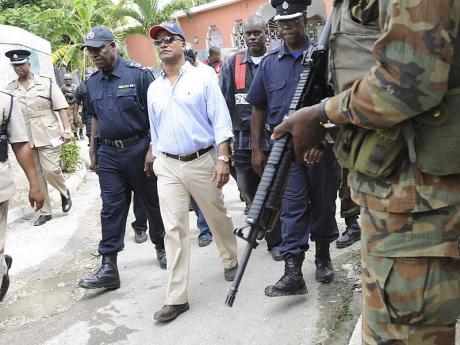 Commissioner of Police Owen Ellington (centre) with Minister of National Security Peter Bunting in the Golden Mews community off St John's Road. The minister was on a tour of communities in the Spanish Town area with members of the security forces on Wednesday, February 22. - file

A FEW weeks ago, while telling the nation of his plan to reduce murders to one per day by 2017, National Security Minister Peter Bunting told the police force that one of the strategies to use in achieving that reduction would be the 'Tivoli paradigm'. The May 2010 Tivoli Gardens operations, as Mr Bunting knows very well, resulted in the deaths of at least 73 people - some residents say as many 200 people may have been killed. There were widespread allegations of systematic, house-to-house executions of young men, which was widely reported in the media. Peter Bunting could not have been unaware of this.

Indeed, the then opposition People's National Party (PNP) made little noise about the widespread abuse of human rights resulting from that operation. Bunting himself signalled his approval of the operation by crediting it with the dismantling of the Shower Posse and a consequent reduction in the murder rate. That certainly would have been the basis upon which he was recommending this successful Tivoli paradigm.

Immediately after that Tivoli paradigm statement there was a marked escalation in the number of people killed by the police, and Peter Bunting cannot escape the implications of the message he sent to the police with that statement. As minister of national security he is, after all, responsible for setting policing policy.

Prior to the recent dramatic escalation in police killings, the police commissioner, Owen Ellington, had been on record denying that police deliberately kill people. Certainly, he made this claim while appearing on the morning show 'Jamaica Speaks'. As a result of public outcry over the spike in police killings, the police commissioner seems to have backtracked on that position, now claiming that there have been "unnecessary and oftentimes unwarranted" killings. Question is: how did he not know this before his statement denying such killings?

Significantly, even before the bloodstains had dried, the police commissioner congratulated the security forces on a job well done in the May 2010 operations. The fact that two political administrations have tolerated him as police commissioner; that the most two recent ministers of national security, one (Dwight Nelson) approving police "collateral damage" and calling the Tivoli operations a "template" for the rest of the inner cities; and now his successor, Peter Bunting, following the same beat, makes it crystal clear that police extrajudicial killings is not the work of untrained or rogue policemen. Rather, it is a policy of state sanctioned by governments and duly executed by the police, beginning at the highest level.

The greatest proof of extrajudicial killings as a state policy is that the May 2010 Tivoli Gardens massacre has not been investigated, and there is no indication that it will ever be properly investigated.