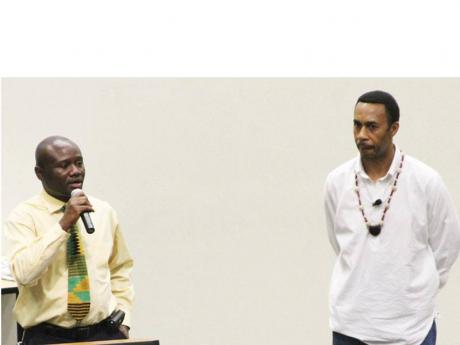 Jamaican Maroon Pride was on display at Georgia State University in Atlanta Georgia, with a sneak preview of the documentary Akwantu - The Journey.

This film describes the journey of the producer, Roy T. Anderson as he attempts to reconnect with his history.

The film takes viewers on a sojourn through Maroon communities in Jamaica, evoking memories of country- living in the Jamaican section of the viewing audience who were particularly appreciative of a bush doctor describing his version of organic viagra.

The film ended with a resounding round of applause from the audience, most of who stayed in the theatre for an hour after the screening to question the producers about their experiences during the film-making process.

Anderson said that it was a particularly emotional experience for him to retrace the experience of the early Africans who were brought to the New World in bondage.

"I had the same experience when I visited the slave dungeons."

Anderson compares this emotion to the feeling of pride he experienced when he filmed, on location, the Jamaican Maroon communities, and particularly Accompong where his Maroon lineage is found.

According to the producer, although the film started as a personal project, it has now evolved well beyond his expectation.

Dr Harcourt Fuller said that this film about the Jamaican Maroon people is a very important element in the study of the African Diaspora.

He said Jamaican Maroons have significant accomplishments that have helped to shape the Caribbean and the western world, as we know it - accomplishments such as defeating a significant military power and getting them to sign treaties, achieving freedom, and creating an independent society, pre-dating all other neighbouring nations in the new world.

The film leaves its audience with the message that "to be the descendant of a people who won their freedom before the American Revolution in 1776, before Haiti became a republic in 1804 and before the French and later the Spanish American revolutions in the 1800s" is a matter of pride.

The Jamaican Maroons had already established free sovereign communities in Jamaica for decades before any of these events.

Dr Fuller said the maroons are one of the most studied groups of African descendants, and this film will make a significant contribution in understanding events of that period.

The documentary Akwantu - The Journey, will premiere at the Institute of Jamaica in June 2012 as part of Jamaica's 50th jubilee celebrations.