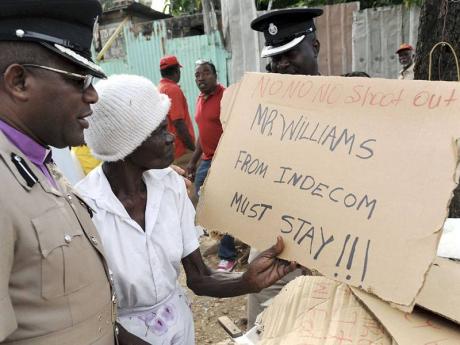 The Independent Commission of Investigations (INDECOM) says a bombshell autopsy report on the body of Dianne Gordon, the 45-year-old Cassava Piece resident killed by the police two weeks ago, has added some urgency to its probe.

The autopsy, which was conducted last Wednesday by the government's chief forensic pathologist, Dr Dinesh Rao, revealed that Gordon's body had marks which "confirm the shots were fired from close range".

INDECOM's Director of Complaints Nigel Morgan confirmed last night that a copy of the report was with his office, but declined to discuss it, explaining that the investigation was still ongoing.

Asked if the report changes the focus of the probe, Morgan said: "What it does now is place a little more urgency on some of the things that we have to do."

The police, in their report to INDECOM, claimed Gordon was killed in a shoot-out with gunmen in the St Andrew community on March 17.

According to the police report, the shooting started after a police team that went into Cassava Piece in search of gunmen was "greeted by gunfire when they entered the community".

Residents, however, disputed this account, charging that Gordon was returning home from a wake when the police entered the community and began firing indiscriminately.

Giving his 'summary of opinion' as to the cause of death, Rao wrote that Gordon was shot nine times, three of which "were perforating wounds".

The report said Gordon, a married mother of two daughters, died "instantaneously" after one of the bullets struck her in the head.

"Injury Nos. 2 and 3 showed blackening, burning and tattooing indicating the shot (was) fired from a close range within 50cm from the muscle end," Rao wrote.

Added Rao: "All shots, except injury Nos. 4, 6, 9, and 2 are most likely sustained when the deceased was in a standing position."

He said the "pattern and severity" of the injuries indicated the use of "high-powered rifled firearm" and said this was confirmed by fragments that were retrieved at the scene.

Rao said Gordon also had two lacerated wounds on the right forearm, which were due to fragment impact injuries.