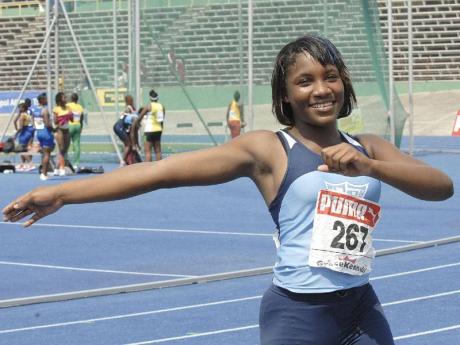 Defending Class Three discus champion, Edwin Allen High School's Paula-Ann Gayle, is promising something big after she registered a modest 32.14 metres in the prelims on yesterday's second day of the Inter-Secondary Schools Sports Association (ISSA)/GraceKennedy Boys and Girls' Athletics Championships being staged over five days at the National Stadium.

"I didn't have to work hard and use all my strength because this is not the big one, so I just wanted to get it over the line, nothing big," Gayle highlighted. "Tomorrow I will show everyone what I have been working for."

Gayle, in only her first Boys and Girls' Champs last year, took the event with a record distance of 39.55 metres. Her 2011 season-best throw, however, came at the Carifta Trials, where she tossed 40.03m. She then went on to claim silver at the Carifta Games.

The 15-year-old has also been impressive this season, as she broke the Central Champs record with a throw of 39.55m. This has given her great confidence going into Friday's final.

"Right now my confidence is over 100 per cent," Gayle expressed. "I don't look when someone else throw. I just go out there to do my best and make my school proud, my coach proud, and also myself."

She added: "I set the record 45.45 at Central Champs and I really want to break that record and set a new one at Champs, so I am heading for 46."

Despite her success, Gayle did not start out throwing the discus, as she ran the 100m up to second form, but did not like it and actually considered giving up track and field all together.

"I used to run, but I never liked the track; I like to watch it, but I never liked doing it, and then my coach said I must try the discus," Gayle revealed. "The first time I threw over 30 (metres) and I just started to train for it and got better and better."

Gayle pointed out that the support she has received from her mother and coach has been tremendous, and this has helped her to balance academics and training.

'School is going well, I am balancing both my extra-curricular activities and my schoolwork," Gayle declared. "My coach is right here, my mom is up in the stands and everybody is always there encouraging me and supporting me."

She is also extremely confident that her Clarendon-based school will be able to claim its first championship title.

"We are positive that we are going to win, everybody is ready and I am going to play my part."