Cardenas revels in the mud 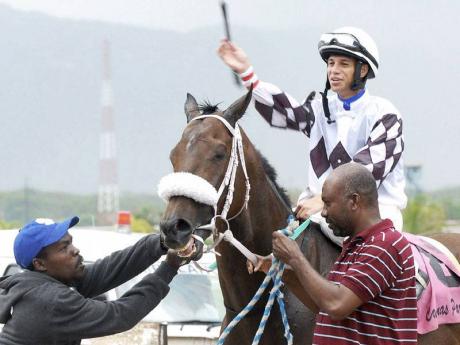 SARAGOSSA, one of three winners for champion jockey Dick Cardenas, is led in by stable connections after his impressive post-to-post win in the 3-y-o and up open allowance sprint at Caymanas Park yesterday. - Colin Hamilton/Freelance Photographer

After failing to ride a winner last Saturday, champion jockey Dick Cardenas rebounded with a triple at Caymanas Park yesterday, including 3-1 chance SARAGOSSA, who made all impressively in the open allowance sprint.

Nunes also saddled SARAGOSSA, who won by four lengths over the round-five course in the smart time of 59.1.

This race was run on a very sloppy track resulting from a heavy downpour shortly after the running of the third race at 2:40 p.m.

SARAGOSSA, drawn on the outside of the seven-strong field, seized the opportunity to set off in front. He was chased by the 8-5 second favourite RIO COBRE under leading jockey Dane Nelson, but after turning for home two lengths clear of RIO COBRE and PALACE GOLD, lengthened his strides to beat PALACE GOLD, with RIO COBRE fading into fourth.

The even-money favourite DANCE SO SWEET, racing for the first time in over five months, was not the best away and was always struggling in the mud.

A 4-y-o bay colt by Saint Appeal out of Pretty Sammy Girl, SARAGOSSA is co-owned by Elias Haloute and Amber Stewart and bred by HAM Stables Limited.

Cardenas, who is still struggling to speak English, said SARAGOSSA was a confident choice based on his close second to RIO COBRE over the straight on February 8.

"This time him renew rivalry on far better terms and it made all the difference," said Cardenas.

He thus pushed his season's tally to 25 for second - seven adrift Nelson (32 winners), who rode two winners in THE LEGACY and ANDY CAPP.

Four-time champion Walker, who scored a thrilling come-from-behind win aboard the Peter McMaster-trained American filly JAH LOVE (5-2) in the sixth race over 1600 metres, is third with 24 wins.

The day's feature for the Clifford Stewart Memorial Cup over 1200 metres provided the 6-5 favourite REGGAE PRINCESS with an emphatic post-to-post victory. She was ridden by Paul Francis for trainer Victor Williams and O'Shaun Connection, both having a second winner in 4-1 chance TRIAL LAWYER who made all with Shane Ellis aboard.