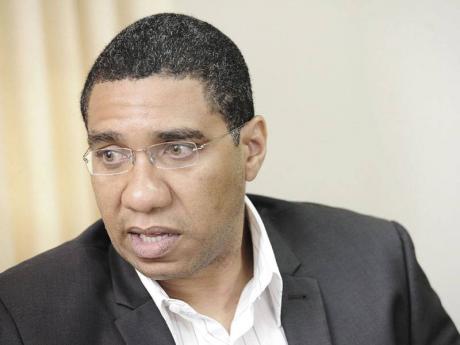 The Opposition Jamaica Labour Party (JLP) might be willing to go along with the imposition of general consumption tax (GCT) on basic food items, providing the Government demonstrates a willingness to implement measures to strengthen the social safety net.

Opposition Leader Andrew Holness told The Gleaner yesterday that the ball was in the Government's court and that his party would not seek to stand in the way of tax reform.

Holness, however, warned that the Opposition would not sit by and allow the Government to implement tax policies that would make Jamaicans, particularly the vulnerable, worse off.

"There are options now on the table. One specific proposal, which is tax on basic food items, does not make a comprehensive tax policy and, therefore, you would have to look at that within the context of everything else that you are going to change," Holness said.

"Let us say the Government decided to accept tax on basic food items but at the same time the Government does not do something to ameliorate the effects of that on the poor, especially the working poor. Then clearly we couldn't support that."

A Green Paper on tax reform, which is currently before a special taxation committee of Parliament, is proposing the reduction of GCT from 17.5 per cent to 12.5 per cent. It is also being proposed that food items which were previously exempt from GCT be subject to the tax.

Similarly, the Private Sector Working Group, in its submission to Parliament, has recommended the elimination of GCT exemption on items such as basic foods.

Prime Minister Portia Simpson Miller, who led the People's National Party to a blowout victory over Holness' Jamaica Labour Party in last December's general election, has said that her party would not be imposing GCT on basic food items.

There has, however, been no definitive position from the minister of finance, Dr Peter Phillips.

Holness, who was a member of the Cabinet which had imposed GCT on basic food items in 2010, before public outrage led to a rollback, appeared to have overruled the position articulated by Robert Montague, the acting chairman of the party.

"We want the Government to take their grubby hands off the people's pensions and savings and to rethink some proposals we hear being bandied about to put GCT even on salt and personal hygiene items," Montague told The Gleaner recently in relation to the issues of tax and pension reform.

Another opposition member, Karl Samuda, who also sits on the special tax committee considering the tax measures, has signalled that the proposal to implement GCT on basic food items might not get past legislators.

"The challenge facing us will revolve around a buy-in by the hierarchy of the Government to be satisfied that the mechanism by which you provide relief to the most vulnerable is of a sufficiently sophisticated nature to guarantee some kind of consistency," Samuda told members of the private-sector group in Parliament recently.

"You are facing an uphill task to convince many, who will be the final arbiters, as to the move to take away exemptions which are now being enjoyed by the poor," he added.

In the meantime, Holness said the victory secured by Simpson Miller and her party in the general election required it to now implement the comprehensive tax reform, which was the critical plank of the stalled agreement between Jamaica and the International Monetary Fund (IMF).

On Wednesday, Finance Minister Dr Peter Phillips said tax reform would be critical to Jamaica entering a new agreement with the IMF.

Addressing the special select committee, which is considering the Green Paper on tax reform, Phillips announced that the tabling of the 2012-2013 Budget would be delayed until May. The Budget is normally tabled in April. Phillips attributed discussions with the IMF as a reason for the delay. He also said it was important that the committee conclude its work on tax reform in time for the tabling of the Budget.

Holness told The Gleaner yesterday that the Opposition would not be standing in the way of tax reform and nor would it be seeking to assist the Government on the matter.

"The Government doesn't really need our support. The Government has a mandate to act. And the Government can't use fear of what the Opposition is going to do as an excuse for them not to act," Holness said.