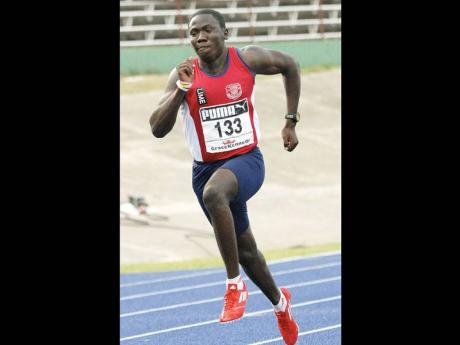 Jazeel Murphy of Bridgeport High in class one boys 100-metre heats on day three of Champs. 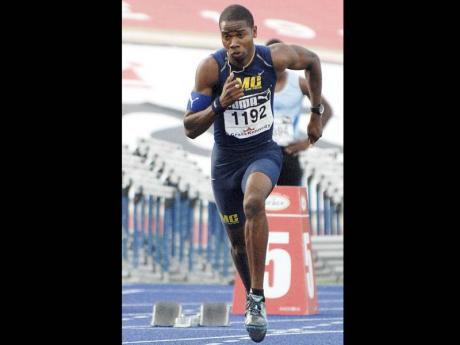 Delano Williams of Munro College in class one boys 100-metre heats on day three of Champs. 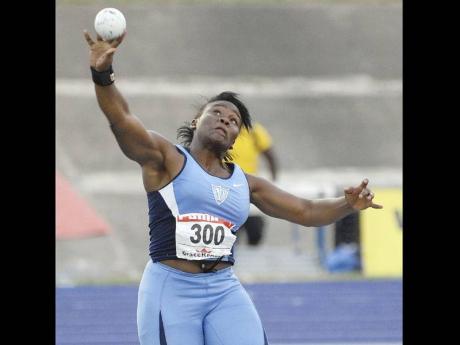 The calm before the storm is how yesterday's third day of the 102nd staging of the Inter-Secondary Schools Sports Association (ISSA)/GraceKennedy Boys and Girls' Athletics Championships can be described. The championships is being held over five days at the National Stadium.

This calm is expected to be disturbed on today's penultimate day, as the sprinkling of onlookers in the bleachers section will no doubt be replaced with scores of track-and-field enthusiasts who will turn out to witness the 23 finals scheduled to be contested.

It is hoped that the rain, which has paid only a brief visit over the past two days, will stay away.

Those who turned out yesterday mainly populated the grandstand and were treated to seven finals - four in the girls' category and three in the boys'.

The atmosphere inside the stadium was subdued in comparison to what is anticipated, especially on tomorrow's final day when the meet is expected to be transformed into a party-like atmosphere. Calabar supporters are expected to congregate to the left of the grandstand, while the right will feature Kingston College supporters. These two groups of fans are usually responsible for the majority of the noise inside the stadium. They, however, will not only be trying to outdo each other where vocals are concerned this year, but also on the track and in the field, as pundits have predicted a close finish on the boys' side between the two schools.

Edwin Allen are heavy favourites to win a first-ever girls' title, but nine-time defending champions Holmwood Technical are not expected to give in without a fight.