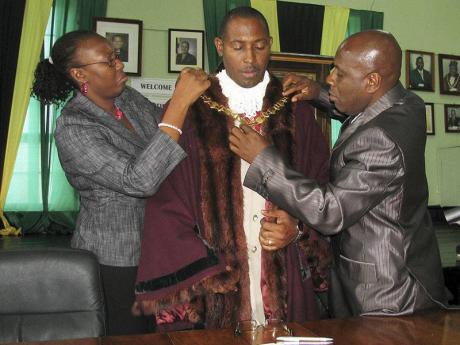 New Mayor of Falmouth Garth Wilkinson is assisted with his robe by outgoing Mayor Collen Gager and a parish council staffer during yesterday's swearing-in ceremony in Trelawny. - Photo by Ruddy Mathison

After brokering a deal with former Mayor Collen Gager, three-term People's National Party Councillor Garth Wilkinson was yesterday voted mayor of Falmouth and chairman of the Trelawny Parish Council during a swearing-in ceremony for councillors.

The Jamaica Labour Party's (JLP) Gager, who decided not to support his colleagues by casting a vote for Wilkinson, was able to break the deadlock that would otherwise have existed in the Trelawny Parish Council after both parties emerged with four councillors in Monday's local government elections.

Independent councillor Paul Patmore insisted he would follow the dictates of his supporters and abstained from voting in the mayor's race.

Wilkinson emerged with five votes while Lloyd Gillings of the JLP polled three votes after he was nominated for the post of mayor.

Sources close to the process told The Gleaner that Gager, who was subsequently nominated unopposed for the post of deputy mayor, was not considered by his colleagues to serve for a second term as mayor.

Meanwhile, Wilkinson, in his acceptance speech, pledged to make the port of Falmouth a part of the town and to tackle the problem of infrastructure. He said he has a plan and a vision that would involved community leaders to push the parish forward.

He highlighted the police station now under construction as a priority area in which he would be investing a lot of his energy.

According to Wilkinson, the Falmouth Bend Down Market must take centre stage in his plans.