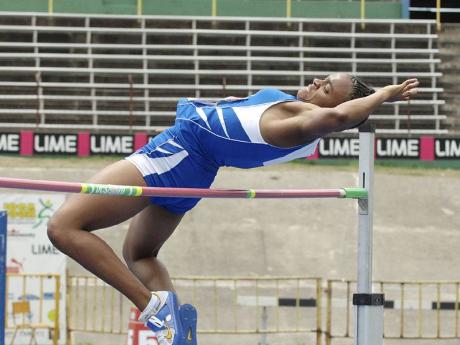 The tears shed by Hydel High's Samara Spencer last year were yesterday replaced by uncontrollable joy, as she triumphed in the Class Three girls' high jump final on the third day of the 102nd staging of the Inter-Secondary Schools Sports Association (ISSA)/GraceKennedy Boys and Girls' Athletics Championships at the National Stadium.

Spencer cleared 1.71m with her final attempt to take the event based on countback over Manchester High's Annastacia Forrester, with Convent of Mercy's (Alpha) Gabriel Foster (1.68m) taking the bronze.

"I feel very happy, because I worked really hard this year and my hard work has paid off," Spencer shared.

This marks the 15-year-old's third year at the championships. In her first year, she won the 80 metres hurdles in Class Four, but had to settle for fourth in the high jump and failed to place in the long jump.

Last year was a big disappointment for the young athlete, as she left empty-handed.

"Last year was very horrible," Spencer revealed. "I participated in the hurdles which I won in the first year, but I didn't make it to the finals. I went into the finals of the long jump with the best jump, but didn't place and was fifth in the high jump," she recalled.

She added: "Mentally, it tore me up, but I just trained harder for this year. There were a lot of tears, but motivation from coaches, friends and parents just made me realise that I just needed to train harder."

Having secured the high jump crown, Spencer will turn her attention to the 80m hurdles preliminaries and the long jump on today's penultimate day.

"I am just hoping to qualify for the finals and then I take it from there," Spencer shared.

The third-form student, who gives her favourite subjects as English and science, would love to represent Jamaica at the highest level, but believes her height will prevent her from doing so.

"I would want to represent Jamaica at the highest level, but I am a very short person, so I don't think it is going to work," Spencer lamented.