Tracey: Win it for me, Edwin Allen 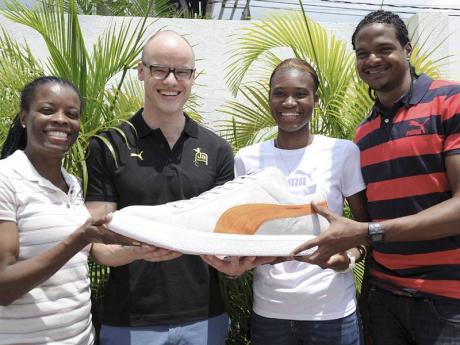 Former Edwin Allen standout Ristananna Tracey has done many great things at 'Champs' but that elusive girls Championships title remains a disappointment for her; one she is confident her former schoolmates will correct this year.

After bowing out of the championships last year with a record run in the 400m hurdles, Tracey was left with a tinge of ambivalence after watching her school fall short of their ambitions of unseating Holmwood Technical for the girls title at the Inter-Secondary Schools Sports Association/GraceKennedy Boys and Girls' Athletics Championships.

"It was disappointing not to win the title at Edwin Allen," Tracey told The Gleaner. "But I was also elated by my personal performances last year, so it was mixed for me."

Tracey, who is now at the Racers Track Club and was yesterday welcomed to the PUMA track and field family after signing a four-year deal with the international sports goods manufacturers, is certain that her alma mater will finally make good on their strength and win their first title tomorrow.

"I believe we have a great chance of winning this year, and when they do then I would have also won," Tracey smiled. "I think they are going to win and I will be ready to celebrate with them."

The IAAF World Championships in Athletics 400m hurdles semi-finalist explained that she has noticed a renewed determination and an entirely new attitude among the Edwin Allen charges this year, and is confident they will be able to make good on their promise to win the championships.

"I think some of the athletes weren't serious enough about it, or probably they did not really believe that we could win in previous years so they did not take it as serious as they should have, or fight to the end as they could have, but that is different this year," added Tracey, who has been in constant dialogue with her former teammates.

"I have regular talks with many of them on the telephone, and after they came into Kingston on Tuesday I went to check on them and speak to a few of them as well," Tracey noted, before speaking briefly on her own development since joining the professional ranks.

"Things are great, training is coming on fine, I am getting stronger and things are going really well so far," said Tracey. "This year I am focusing on my technique and speed and I am happy with where I am at this point."

It is left to be seen if Michael Dyke and his Edwin Allen troops will be able to make the pundits look like geniuses this time around, or if the wily Maurice Wilson will be able to encourage another Holmwood rally.