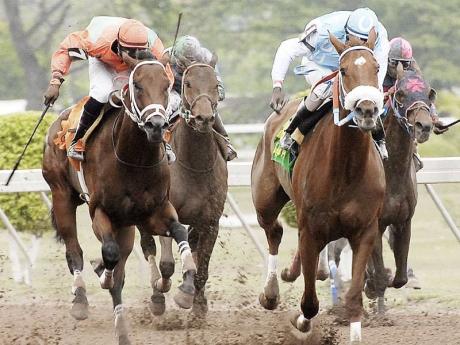 TRIAL LAWYER, running at odds of 4-1 with Shane Ellis aboard, goes all the way in the second race over 1300 metres, winning by 11/2 lengths from fast-finishing THE VALIDICTORIAN (out of pic) and third-place WINCHESTER (No. 7, Paul Francis) at Caymanas Park on Wednesday. The 5-y-o gelding was the first of two winners for trainer Victor Williams and O'Shaun Connection on the card. - Colin Hamilton/Freelance Photographer

Tomorrow's 12-race Jockeys' Guild Day programme at Caymanas Park offers large and competitive fields, a situation that should test even the most knowledgeable punter.

Both the Pick-9 and Super-6s start anew, with the card facilitating two Super 6s.

The Pick-9 will embrace races four to 12. We look at the first Super-6 for a change, this commencing with a 1200-metre race for native and imported three-year-olds in which six have been declared.

Despite the small field, the race should provide keen competition among the trio of HOWGREATTHOUARE under 'Hall of Fame' jockey Winston 'Fanna' Griffiths, SUNSHINE BOY with champion jockey Dick Cardenas, and the American filly DOUBLE BUTTON with four-time champion Omar Walker aboard.

It should be an intriguing contest among them, but the Philip Feanny-trained HOWGREATTHOUARE looks a really good colt in the making, and following his good second to stable companion RUNJOHNNYRUN in a fast-run 1100-mere race in which he had DOUBLE BUTTON behind last Saturday, should notch his maiden win on this his third outing.

Next on the programme is Division I of the Al Gopie Memorial Cup for native-bred maiden four-year-olds and up over the straight five course. This marks the 13th running of the race run in memory of popular lightweight jockey Alexander Gopie, who on Saturday, November 20, 1999, becoming the first and only jockey to die in a riding accident (spill) at Caymanas Park.

Indications are that the lightly raced GREEN BERET from the stables of Spencer Chung will run out an easy winner with former Jockeys' Guild president Ian Spence aboard. The 4-y-o bay colt by Vanadium out of Tropical Wave finished a close fourth to BLACK ROCKET on his debut over 1200 metres last December, and returning in good nick and administered Lasix as well, should win at the expense of HOMING BOY and JELANI.

The third race over 1100 metres for $450,000-$400,000 claimers has attracted seven starters, including top contenders ROMEZ. MACHISMO, SOCA PARTY and DESIGN STAR, who has won two of his last three races in fine style.

DESIGN STAR made all over 1200 metres to beat subsequent winner MUMBAI MAESTRO by four lengths and will be gunning to make all once again. However, the veteran campaigners ROMEZ (Cardenas up) and MACHISMO (Omar Walker aboard) are coming to run and ROMEZ, in particular, will not go down easily, based on his close third to SAN ANTONIO over 1200 metres February 4 on a $500,000 tag.

Nine starters have been declared for the fourth race, a restricted allowance IV over 1500 metres for four-year-olds and up. The horses to note are the front-running SUNDOWN, STORM WATCH (knocking at the door) and MEA CULPA.

MEA CULPA will be having her first outing since December of last year, but has been taken to task at exercise by trainer Anthony Nunes and none will report fitter. She looks nicely off at the weights with only 52.0kg (Cardenas up), and providing she is alert at the start, should win from STORM WATCH (Walker up) and SUNDOWN.

REGGAE ROCK, who should have the beating of $180,000 claimers, ran well on a $250,000 tag behind SABINA over the straight on March 10, and now dropped in class, should win the fifth race over the straight from his favourable high number draw.

Claimed out of his last race by trainer Andrew McDonald, REGGAE ROCK should win from OVERPRICED and consistent BALLROOM DANCER. Then, take SOJOURNER TRUTH, who was narrowly beaten by MONEYNEVERSLEEP over 1400 metres last Saturday, to go one better with Walker up in Division II of the Al Gopie Memorial Cup, where PAJARITA and BURNING CLEARANCE are twin dangers.