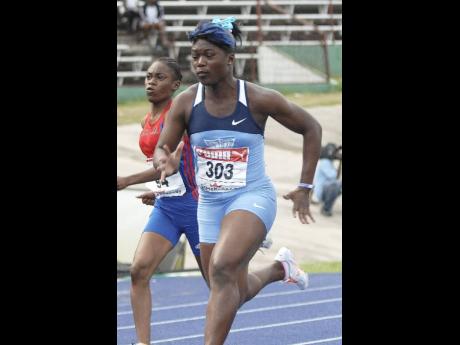 Pre-championships favourites Edwin Allen High, led by a record-breaking shot put throw by Danniel Thomas, are still in front after seven finals in the girls' section of the Inter-Secondary Schools Sports Association (ISSA)/ GraceKennedy Boys and Girls' Athletics Championships at the National Stadium.

The Clarendon-based school leads the way with 56 points. Defending champions Holmwood Technical are 11 points adrift on 45. The top five is rounded out by Vere Technical (41), St Jago (28) and Hydel (24).

Thomas threw 14.47 metres to win the girls' shot put open and in the process erased the old mark of 13.64m set by St Jago High's Kellion Knibb last year. Knibb was on hand to witness the breaking of her record, as she took third with a throw of 13.52m.

The vastly improved Gleneve Grange of Holmwood Technical claimed the bronze with a throw of 13.74m.

Thomas, 19, broke the old record mark in the girls' discus throw Class One to claim silver with a mark of 50.42m, was naturally delighted.

"I am happy because this is my final year at Champs," Thomas revealed. "I am the oldest one in the team and everybody looks up to me, so coming out here and performing at my best and delivering for my school is a motivation for the younger ones," she added.

Hydel High's Samara Spencer secured the first gold medal of the day and the first for her school at this year's championship, as she took the girls' Class-Three high jump with a personal best clearance. Spencer cleared 1.71m with her final attempt to take the event based on count back over Manchester High's Annastacia Forrester, with Alpha's Gabriel Foster (1.68m) accounting for the bronze.

Abigail Swaby continued her dominance in the long jump Class Three, as she easily took the event with a season-best leap of 5.46m. Hydel's Osheca Barnes claimed the silver with a jump of 5.03m ahead of St Andrew High's D'Andra Morris who jumped 5.0m.

Today's penultimate day will feature 12 girls' finals with the first being the girls' discus Class Two, which is set to get under way at 1:35 p.m. The highlight of the day will, however, be the 100m semi-finals and finals.

There were no preliminaries for the girls 100m Class One due to lack of entries. Shawnette Lewin of Edwin Allen is favoured to take the event as she comes in with a season-best 11.73 seconds. Her toughest challenge is expected to come from St Jago High's Melissa Williams, who has a season-best 11.80.

World junior bronze medallist, Christania Williams of Edwin Allen, leads all qualifiers in Class Two with a time of 11.57 seconds. She is followed by Camperdown's Peta-Gaye Williams, 11.86, and Holmwood's Diana Johnson (11.87).

In Class Three, defending champion Shauna Helps of Wolmer's was the only competitor to dip below 12 seconds, as she qualified with a time of 11.88 seconds.