Man United hold all the keys 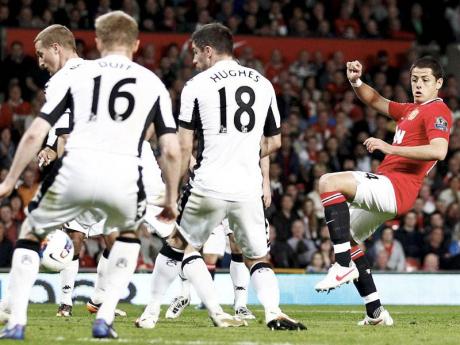 With a three-point lead and an easier schedule for the Premier League run-in, Manchester United head to Blackburn on Monday as the favourites for the title over local rival Manchester City.

United's trip to Ewood Park begins a run of four matches against teams currently in the division's bottom six, although manager Alex Ferguson doesn't believe that necessarily gives his team an edge over City.

"We expect a difficult game - that's the way all the games will be," said Ferguson, whose team clinched a record 19th English title with a win at Blackburn last season. "You can look at all the games and say Blackburn, Queens Park Rangers, Wigan and (Aston) Villa are all fighting for their lives. Hopefully we can navigate them."

United was upset 3-2 by Blackburn at Old Trafford on New Year's Eve - the reigning champions' only home loss apart from their 6-1 thrashing by City in October.

City's away record has slumped since then, and it is its home form that is keeping Roberto Mancini's side in the hunt for a first English title in 44 years.

Sunderland travel to City tomorrow looking to avoid becoming the 16th straight team to lose in the league at the Etihad Stadium.

"Why wait until next season if we can win it now?" City striker Sergio Aguero said. "I can promise you that we'll be fighting until the very end. We all want to make it and though it won't be easy, we believe we can win the Premier League this season.

"Winning titles is about never giving up and we will never give up."

The neighbours go head to head on April 30 in a match that could end up deciding the destination of the title but a squabble that started last week between Ferguson and City executive Patrick Vieira has continued into this week.

Ferguson responded to Vieira's claim that United was desperate to call veteran midfielder Paul Scholes out of retirement by criticising City for welcoming back Carlos Tevez after his lengthy strike.

Vieira, a 1998 World Cup winner with France, came back again on Wednesday, saying United receive "some advantage that other teams don't get" when they play at home.

"Every club gets breaks here and there, you get good ones and bad ones," Ferguson said Thursday. "It evens itself out over the season, that will never change."

United will again be without Portugal winger Nani because of an ankle injury, but centre back Rio Ferdinand is fit despite coming off against Fulham with a back problem.

United and City are well clear of what appears now a four-way fight for the other two qualifying places for next season's Champions League.

Third-place Arsenal are three points clear of north London rival Tottenham ahead of Saturday's match at QPR, who dropped into the relegation zone last weekend.

Spurs host Swansea on Sunday while Chelsea and Newcastle, who are both five points further back, face Aston Villa and Liverpool, respectively.

Liverpool, who have already qualified for next season's Europa League by virtue of winning the League Cup, have lost five of their last six games to drop out of contention for a Champions League spot and increase the pressure on manager Kenny Dalglish.

The weekend's biggest match among the relegation-threatened teams comes at Molineux, where bottom side Wolverhampton Wanderers host fourth-bottom Bolton.

Wolves are three points adrift of both QPR and Wigan, who are at home to Stoke.