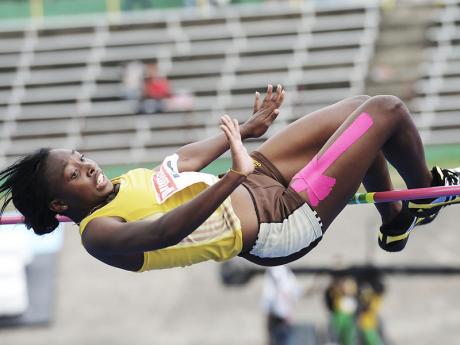 Chanice Porter of Manchester High clears the bar as she competes in the girls' Class-One high jump final during the ISSA/GraceKennedy Boys and Girls' Athletics Championships at the National Stadium yesterday. Porter won the gold medal after establishing a new record, 1.86 metres.- Ricardo Makyn/Staff Photographer

INTENSE FRIENDLY rivalry both on the track and in the stands is expected to fuel the competitive spirit of the annual Champs on today's final day, as early favourites Kingston College and Calabar, on the boys' side, pull out all the stops to lay hold on the prestigious title.

It is also anticipated today that nine-time defending champions Holmwood and first-time aspirants Edwin Allen will do battle for the girls' crown.

The organiser of the 102nd staging of Champs, the Inter-Secondary Schools Sports Association (ISSA), in collaboration with the security forces, is taking nothing for granted where the safety of patrons attending the five-day event being held at the National Stadium is concerned.

"We are taking absolutely no chances with the security," ISSA President Walton Small pointed out. "For the past three to four years, it has been a major issue as it relates to security, so we have made it our priority and taken everything into consideration. We have both the Jamaica Constabulary Force, as well as private security and we are confident that they will be adequate to accommodate whatever crowd," he added.

And both sets of supporters for the green arm of Calabar and purple arm of KC gave the security measures a passing grade.

"We have had violent situations over the years at Champs and we have to do things to avoid bloodshed, so I don't see anything wrong with the security measures," Junior Patterson, who accompanied his son, told The Gleaner.

Luke Taylor, a Calabar supporter, said the current security measures in place and an increase in the number of police on the final day should be adequate to deal with any problems.

"I am quite pleased with the security arrangements. I was thoroughly checked and therefore I am more comfortable and feel more secure being inside," Luke commented.

Members of the Jamaica Constabulary Force and private security personnel were out in their numbers on the penultimate day of the event. Patrons were subjected to metal detector, patdown and bag searches before being allowed to enter the stadium.

Deputy Superintendent of Police Ralsford Hardie, who is attached to the Mobile Division, is advising persons not to carry weapons. He encouraged supporters to turn out in a frame of mind to enjoy themselves.

"Leave the weapons at home because when you are going to have fun, you don't need weapons," Hardie said.

Tickets for the grandstand have been sold out for today's action, but there are still hundreds available for the bleachers.

The ISSA president yesterday urged persons attending the event to sit in their designated seats.

The majority of yesterday's patrons were concentrated in the grandstand with mainly schoolchildren occupying the bleachers.