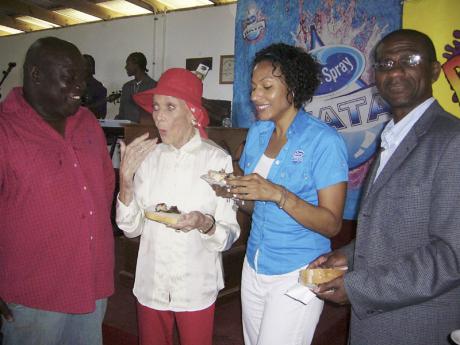 From left: Garwin Davis, chairman of associate sponsor of Tropical Vibes, chats with Patrice Wymore Flynn, whose expression tells us the jerked pork was spicy, Tamar Ward of title sponsor Wisynco, and member of Parliament Linvale Bloomfield at the press launch on Wednesday, March 28.- Photo by Gareth Davis

BOSTON, Portland:Tamar Ward, brand manager of Wisynco, title sponsor of Boston Jerk Festival, says it is a fitting time to return the event to the community, which was without its own festival for more than six years. It was moved from the community to the parish capital and renamed the Port Antonio Jerk Festival.

During the launch, recognition was given to Boston's first citizen, Patrice Wymore Flynn, widow of former Hollywood actor Errol Flynn, whose involvement in community building stems for the better part of 40 years. Mrs Flynn will receive a plaque on the day of the festival for her invaluable service to community development.

Member of Parliament Linvale Bloomfield praised the organisers for their vision to provide the home of jerk with its own festival in the household named community.

"I was disappointed when the festival was removed from Boston some five to six years ago into Port Antonio," he said. "But today I am happy to see that once again a festival is taking place in this internationally famed community, which has so much potential."

Events coordinator Stephen Williams promised that the festival will be a memorable one for every patron, and that the main objective is to provide quality, delivery, and satisfaction to all.

A shuttle service will be provided free of cost for patrons, and parking will be available at Poinciana Park and Castle, and plans are in place for additional parking space. The Port Antonio police will provide security, and no street-side parking will be allowed.

Jerk lovers can expect to revel in a number of jerked products prepared in authentic sauce including pork, chicken, shrimp, lobster, conch, fish, and sea cat.

Entertainment will be headed by dancehall king Beenie Man and Chris Martin, along with a host of other international and local artistes. The event starts at 10 a.m. and a number of other attractions, including a kiddies village, will be on location.

Entry fee for adults will be $800 and children under 12 years $400. Tickets will be sold at the gate, and there will be no presold options.