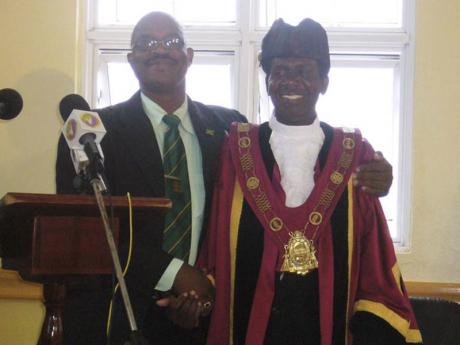 PORT ANTONIO, Portland:CONTROVERSIAL COUNCILLOR Benny White was sworn in as mayor of Port Antonio on Thursday, a decision, according to many, which came as a shocker after it was widely expected that veteran councillor Dexter Rowland would have assumed the post.

Former mayor Floyd Patterson took off the robe and dressed White in the chairman's garments before hugging and congratulating his successor during a ceremony which was held at the Portland Parish Council.

"I am duly elected. No controversy this time around and I am a happy man. I won in 2003 on a Jamaica Labour Party (JLP) ticket by 10 votes, but this time around I have done it for the People's National Party (PNP), winning by more than 700 votes," White said during his address.

"I will be working with the people of this parish and other stakeholders to beautify the town of Port Antonio, which is in dire need of a facelift. Once the town is clean and beautiful, we will be able to better accommodate visitors."

White, who defeated former councillor Margaret Phillips to win the Fellowship division, is enjoying a second stint in office, having served in that position in 2006, when he switched allegiance from the JLP to the PNP.

But while White has assumed the top post in the Portland Parish Council, some influential persons and other residents, including businessman Lauriston Davis, have raised concerns as to whether or not the hands of the PNP hierarchy were forced by the controversial councillor, who they claim may have threatened to return to the JLP unless his demand was met.

White told The Gleaner that he was always the more popular choice for the post as mayor, as 90 per cent of the business community were supporting his return. He, however, admitted that the decision to appoint him as mayor was not done through the hierarchy of the PNP, but instead was agreed among his colleague councillors.

White also scoffed at his critics for suggesting that he held the PNP to ransom, after that party only held a slim majority of councillors, which puts him at an advantage to call the shots and make his play.

Wayne McKenzie of the Prospect division was elected deputy mayor.

Eight other councillors, including Rowland, Elaine Osbourne, Damion Molloy, and Wayne Mckenzie, were sworn in. Floyd Patterson, Derron Wood, Rupert Kelly, and Gloria Silveria, all of the JLP, were also sworn in.