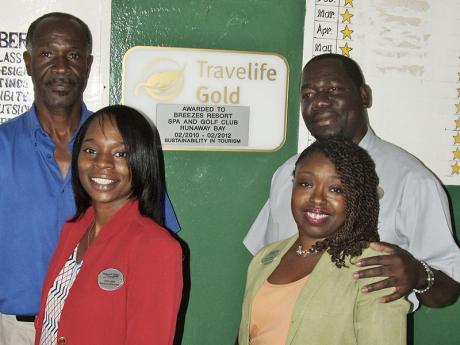 RUNAWAY BAY, St Ann:BREEZES RUNAWAY Bay Resort Spa and Golf Club is basking in the success of its team members who have enabled the hotel to earn another Travelife Gold Award for Sustainability in Tourism - the second in two years.

The award identifies and rewards the work a hotel is doing in order to maintain the environment.

Properties are audited biennially to determine the level of maintenance and sustainability being practised, and are awarded gold (highest), silver or bronze (lowest) awards accordingly, by Travelife, in collaboration with travel agents. Breezes Runaway Bay got its first gold award in 2010.

And after copping two consecutive gold awards, the hotel's group quality assurance manager, Shauna Cameron, has committed to ensuring that the trend continues.

"This trend will continue because we are very keen to continue maintaining the environment," Cameron told The Gleaner. "This encompasses both the people and the environment itself; so the hotel has a lot of sustainability procedures and policies that are followed on a daily basis."

Among the activities that have enabled Breezes Runaway Bay to cop the gold award is a farm, which is operated on the property, from which produce such as bananas are reaped by the hotel with some being sold to sister properties in the SuperClubs chain. There is also a plant nursery from where plants are sold to the general public.

Maintenance manager Steadman Gray explained that the hotel has a very rigid standard operating procedure (SOP), which is also taken into account.

A wastewater treatment plant, which recycles sewage, which is then used for irrigation and in the cooling tower, has saved the company thousands of gallons of water per month, which is close to a million dollars in monetary terms.

"It's not easy maintaining a property such as Breezes Runaway Bay spic and span every day to enable it to earn a gold award, but it's a total team effort," Gray said.

"It's a very big challenge, but with hard work, determination and teamwork, we always achieved a lot," he said.

The team includes the grounds staff and also according to the grounds manager, Robert Watson, having a good relationship with the workers ensures that they know exactly what is expected of them.

"And this will ensure they do display that good-quality work that will benefit the hotel on a whole," Watson declared.

But how does it feel earning two consecutive gold awards?

"The feeling is great. I'm sure most of my guys are happy in achieving it, because they have done quite a bit to ensure that Breezes Runaway Bay gets this award," Watson said.

"We just need to be consistent all the time, not necessarily to look out for an award like this, but just to ensure that consistency is maintained.

But it's more than just a good feeling that the award has brought about. According to public relations and weddings manager, Patricia Clarke, it is expected to impact positively on guests' arrival figures.

"Guests do look for these things," Clarke explained. "One of the first things they look at is the grounds. I mean, the grounds department is doing a fantastic job and it impacts very, very positively."