Earl Jarrett is Manager of the Year 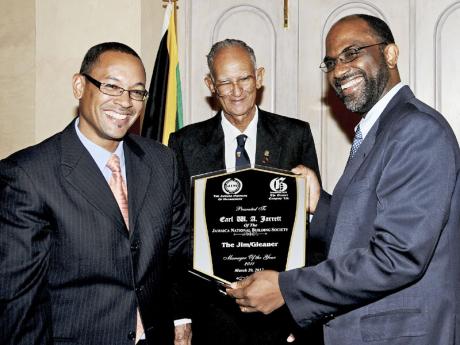 General manager of the Jamaica National Building Society Group, Earl Jarrett (right), who received an award on Thursday after being selected the Jamaica Institute of Management (JIM)/Gleaner 2011 Manager of the Year, shares a light moment with Christopher Barnes (left), managing director of The Gleaner Co, and Dr Alfred Sangster, chairman of JIM.- Winston Sill/Freelance Photographer

He received the award on Thursday during a special ceremony at King's House, at which time a medal of honour was presented to Professor Kenneth Hall, former president of JIM.

Jarrett was selected for the top award from a field of seven other nominees who managed established organisations.

The JNBS general manager said he was humbled by the prestigious award, noting that it would help him to be a better leader in his organisation.

"It is a part of a continuing learning process for me and so this encourage me and strengthen me to continue to read, continue to observe and continue to apply the best management principles in my own organisation," he added.

Governor General Sir Patrick Allen in his message, read by Lady Allen, congratulated all eight nominees for the hard work they have been doing to improve the standard of Jamaica.

"You are all winners in your own area of work and for the contribution that you have made to our nation."

In his response, Hall expressed sincere gratitude for the award before commending the team of JIM and The Gleaner Company for the hard work they have been doing.

The first George Phillip Memorial Bursary was also presented to Sharline Hall-Howell, a final-year student in business administration at UTech.