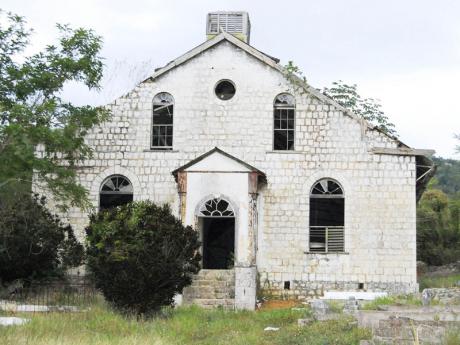 MILE GULLY, Manchester: WHEN ONE visits Mile Gully and engages residents in a discussion about their town, a topic that is bound to come up is the reputed 'Duppy Church' which is said to be haunted.

The church in question is the abandoned St George's Anglican Church, about five minutes' drive from the town centre.

It is said to have been abandoned because the so called 'duppies' were creating havoc on the congregation. Most of the members moved to the nearby St Simon's Anglican Church in Mile Gully.

After getting a 'bag of duppy stories' from residents, our news team was given a 'tour guide' - Paul - to accompany us to the abandoned church.

The church is situated on the right, on the way to the nearby district of Comfort Hall. It is isolated, as there are no other buildings near it.

There were no doors and the windows were broken. It had this eerie look and, without a doubt, its spooky looks could fit easily into one of those horror movies.

Braving to enter the compound after some encouragement from Paul who told The Gleaner: "It's day time man, suh yu safe. If it was night now, a different thing, the duppy dem bad a night."

There were graves around the churchyard, as well as tombstones, some dating back to the latter part of the 19th century.

Inside the church was even more creepy, with all furniture long gone and a chilling wind.

Paul proceeded to tell stories he heard of the haunted church. One was of a young woman who stopped a taxi, which was on its way to Mile Gully. He stopped for her and she sat in the back of the car. However, on reaching Mile Gully, he realised he was alone in the car as the woman was nowhere to be seen.

Paul added: "People hardly walk here alone even in the day, much less night. The greatest fear of drivers passing here who used to the area is for their vehicle to break down at this spot (St George's Anglican Church).