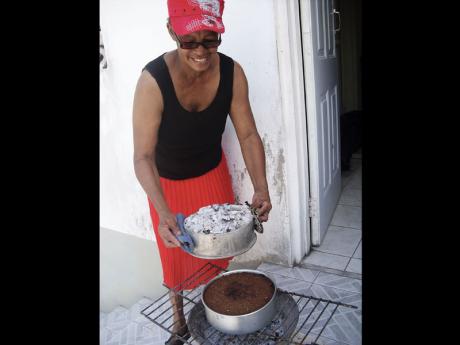 Jennifer Rodney checking to see if the pudding is done.- PHOTOS BY NACKEISHA TOMLINSON

SANTA CRUZ, St Elizabeth:"MY FLAVOUR is different from everybody else's, it is a gift from the Lord in my hands. My secret ingredient is the blessing from the Lord," said retired teacher Jennifer Rodney.

On most weekdays, Rodney can be seen in the town of Santa Cruz plying her assortment of confectioneries. Corn pudding, potato pudding, grater cakes, peanut cakes, complete her range of products.

She walks with her wares in her signature pudding pan and stops whenever anyone wants to purchase her pastry. For just a hundred dollars per slice for the puddings and less for the other items, one can enjoy a truly Jamaican treat. She also has clients who pre-order for relatives in the diaspora. Rodney said her client base is very loyal.

She uses the authentic 'hell on top, hell on bottom and hallelujah in the middle method' to bake. This means she uses a coal stove with fire underneath and on top of the baking tin.

Rodney told The Gleaner that her reason for using that method as opposed to the gasolene stove is that: "There is a special flavour that you get from the coal stove that the gas stove doesn't give you." A consistent supply of coal is not problematic because she has a dealer in Santa Cruz and her neighbour supplies her whenever her dealer is unable to.

Rodney is zealous about quality control. Consequently, she bakes three times per week, after which she goes into the town with the freshly made items. She informed The Gleaner that, because she uses coconut as one of her ingredients, the shelf life is maximum two days. She said: "Sometimes I have things coming back in. When I come back with puddings, I give them away."

The Gleaner asked Rodney what inspired her love for baking. She said the cook at Hopeton Elementary School in Warminster, who used to bake in addition to her regular cooking duties, influenced her. Rodney followed suit as she spent 25 years teaching Home Economics at St Elizabeth Technical High School (STETHS). It was during her teaching years that she started baking to supplement her income, as she is a single mother of three.

more than a financial need

Since retirement in 2004, she explained that her baking has fulfilled more than a financial need. "It keeps me active and fit. If it wasn't for the baking, I would be sitting down, probably I would be gone already. It really keeps me going."

Rodney expressed gratitude for her ability to continue to earn despite the fact that she is 64 years old. She said her trade is not without challenges. The price increase for her ingredients and the unpredictable St Elizabeth weather sometimes hamper her ability to sell her products freely.

From her baking proceeds, Rodney sometimes helps those who are in need. She said the practice started during her teaching years at STETHS.