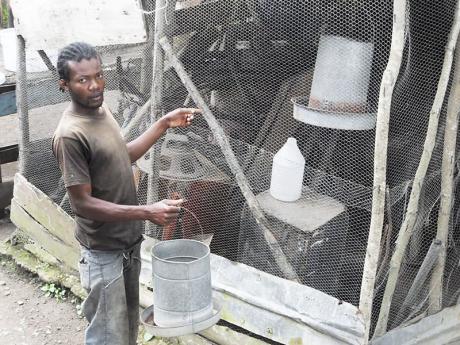 BROWN'S HALL, St Catherine:NIGEL 'STYLA' Knight was not one of the brightest students at Tacius Golding High School in Brown's Hall, St Catherine, during his time, but he has learnt enough to carve out a living.

"Well me can do furniture work, do woodwork, because when I was going to school mi learn dem things dey. Mi drama teacher Shaka Bryan teach mi, mi can make hair clips out of board, mi can do little plumbing," he explained.

Knight added: "Because mi do good in woodwork at school, dem send me on job experience and, after mi finish school, mi go back and work a while."

Though he is skilled in several areas, the Brown's Hall native said lack of funds has prevented him from pursuing further training and certification.

When he was 20 years old, he embarked on a project, but said he needs assistance to make it a reality.

"Is seven years now since I make this fowl coop and mi never get a chance to put any chicken in there, because mi no have no money to buy them. So right now I wouldn't mind if somebody give me a start, so I can use it to back up the little odd jobs dem to finance miself," he said, pointing to a coop built on his grandmother's property, now used as a storeroom.

Knight explained to The Gleaner that he does not rely on one skill to put food on his table.

"Mi do mason work, as a labourer dig out foundation. One a the time when tings start get rough pon mi, mi turn a Spanish Town and buy couple packs o' bag juice and sell. Right now, a little callaloo me a sell, sometimes push me handcart and ting, mi try fi mek work fi miself all the while," he said.

The eldest of eight children, Knight said he has been carving out a living since he was in high school.

"Sometimes mi go out and hustle and, when mi hustle a ting like all $1,000 or whatsoever, me split it and give my mother all a $500 to send them other one fi a two day," stressed Knight.

Clad in dirty clothes and shoes, he said he is not one to sit idly by and wait.

"Right now, a bush me a come from. Mi go plant little corn, so when me reap dem, mi can sell a man who sell soup. Mi can't sit down, mi a working-class man."

He continued: "Mi is a man nuh like the roadside and the idle ting and mi nah go bleach out my face like weh mi see whole heap a little yute a do, maybe because is the only ting dem can do because dem nah work," he noted.

His former schoolmate and friend, Collinton Smith, a cabinetmaker, lauded Knight as a hard worker who is determined to defy the odds to survive.

"Him willing to try, him only need a little help. Him do him little farming, him raise a one goat, always on the go to make a living," Smith told The Gleaner.