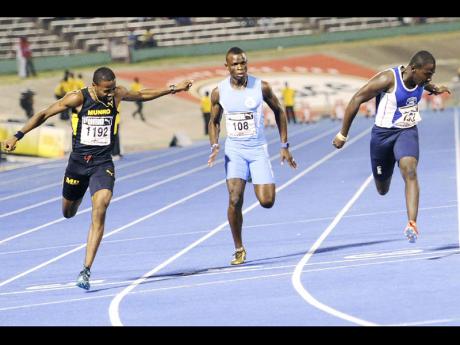 He was one of the last to know that he had won, but Munro College's Delano Williams finished like a freight train to upstage Brigdeport High's Jazeel Murphy inside the National Stadium in the marquee Class-One 100m final, as Calabar High surged to the top of the boys standings at the ISSA/GraceKennedy Boys and Girls' Athletics Championships last night.

"I pointed to him (Murphy) because I thought he had won, but I give thanks for the victory," said Williams, who won in 10.37 seconds.

"My 'Three D' approach paid off; discipline, determination and it starts with me so Delano, I am really happy for this," he added.

Murphy crossed the line in 10.39, with Jevaughn Minzie finishing third in 10.54 in an event that saw top guns - Wolmer's Boys' Odeen Skeen picking the start to be disqualified and Green Island's Odail Todd pulling out from the semi-final stage.

There was no stopping St Jago's Raheem Chambers, who made the most of an explosive start to set a new record in the Class-Three 100m - the first among boys at this year's championships. He stopped the clock at 10.86, bettering Kevaughn Rattray's 2010 mark of 10.90.

Jamaica College's Gavin Gibson improved on last year's bronze medal, mining gold in the Class-Two long jump with a mark of 6.91m, which was achieved on his penultimate attempt.

The boys from Red Hills Road made a crucial rally after the Class-Three 1500m final, after Chevenne Hamilton's 4:21.46 silver-medal run closed the gap on KC to 6.5 points at that point.

Things were even better for Calabar in Class Two, with Alex Hutton, 4:06.19, and Orville Dixon, 4:07.23, finishing second and third, respectively, behind the powerful Delano Rochester (Clarendon), 4:05.59, adding the Boys Champs crown to his Central Champs win earlier this year. It was at this point that Calabar took the lead for the first time yesterday.

The Class-One 1500m was taken by favourite Orane Wint from Bellefield in 3.59.27 ahead of the Holmwood pair - Philmoure Williams, 4:01.91, and Andre Housey 4:02.14. KC's Alex Saunders picked up four valuable points for his school, as he found a late burst of energy to push through for fifth place.