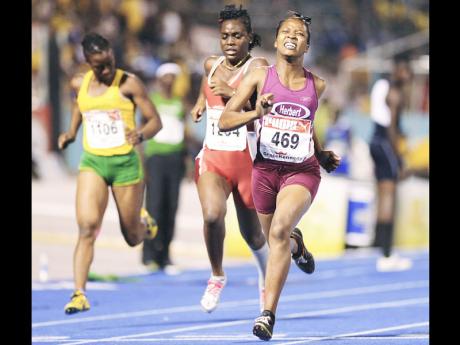 Edwin Allen continued their impressive march to a first-ever girls' title after extending their advantage on yesterday's penultimate day of the 102nd staging of the Inter-Secondary Schools Sports Association (ISSA)/ GraceKennedy Boys and Girls' Athletics Championships being held over five days at the National Stadium.

With action is set to start at 1:30 p.m. today, Edwin Allen lead with 176 points after 18 events, with defending champions Holmwood Technical some way back on 100. The top five is rounded out by St Jago (71), Vere Technical (56) and St Elizabeth Technical High School (36).

The highlight of the day, however, came from Wolmer's Girls' Shauna Helps, who posted a blistering 11.50 seconds to defend her 100m girls' Class-Three title. In the process, she eclipsed Lisa Sharpe's 13-year-old record of 11.65.

Seidatha Palmer of Herbert Morrison stopped the clock at 11.74 seconds to claim the Class-Three 100m. Silver and bronze were accounted for by Herbert Morrison's Kenesha Stephens (11.86) and Edwin Allen's Shawnette Lewin (11.88), respectively.

Manchester High's Chanice Porter claimed her first-ever gold medal at Champs in the high jump, as she captured the Class-One title with a record leap of 1.86m. Her effort, which eclipsed the old mark of 1.84m set by Peaches Roach back in 2003, is just .02m outside of the national junior record.

Gleneve Grange of Holmwood added to the bronze medal she captured in the girls' shot put open, as she claimed gold in the discus throw Class Two with a throw of 43.32m. Shannique Waite of St Jago took silver with a mark of 42.72 metres while Edwin Allen's Tasha Crosse, 41.66m, took the bronze.