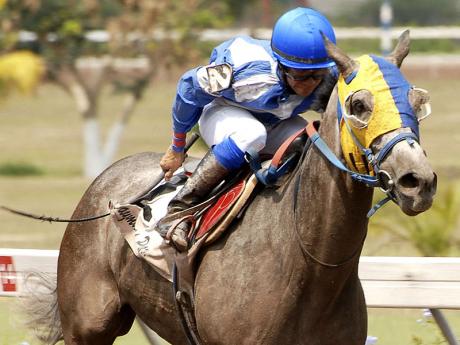 Today's annual Jockeys' Guild of Jamaica Day programme is on at Caymanas Park with two trophies up for grabs among the 12 races.

These are the Jockeys' Guild of Jamaica Trophy restricted allowance IV (non-winners of two) closing race over 1400 metres, and two divisions of the Al Gopie Memorial Cup for native-bred maiden four-year-olds and up over the straight-five course.

The latter race, which marks its 13th running, is being run to perpetuate the memory of popular lightweight jockey Alexander Gopie, who died in a spill at Caymanas Park on Saturday, November 20, 1999.

Both sections of the Gopie Memorial have attracted 13 starters. In Division I, the lightly raced GREEN BERET, who showed promise on his debut last December, has been administered Lasix and should have little difficulty in putting away HOMING BOY, JELANI and BAYS REPORT.

A bay colt by Vanadium out of Tropical Wave, GREEN BERET will be ridden by Ian Spence for trainer Spencer Chung.

In Division II, SOJOURNER TRUTH, who ran a blinder in defeat last Saturday when caught close home by MONEY-NEVERSLEEP over 1500 metres, should rebound with a win, especially with four-time champion jockey Omar Walker replacing the sparingly used Douglas Badaloo. She can expect worthwhile opposition from BURNING CLEARANCE (knocking at the door), CHAM-PION LINKS and PAJARITA under leading jockey Dane Nelson.

four to choose from

The closing race for the Jockeys' Guild Trophy has attracted a maximum field of 16 and the winner is expected to come from the quartet of GOLDEN IMAGE, SHYANA, IAN'S GOLD and ANNTRACK, who scored a runaway win over 1200 metres in maiden company on March 17.

ANNTRACK, who hails from the stables of Wayne Parchment and his mother Margaret, should prove a worthy opponent even with the competition enhanced. But the two best equipped to fight out the finish are GOLDEN IMAGE, to be ridden by former champion Shane Ellis, and SHYANA with top-line jockey Paul 'Country' Francis aboard.

Both report well trained, but at the weights the choice has to be SHYANA, who carries a mere 51.0kg and has been taken to task at exercise by her trainer, Rohan Gordon.

The lightly raced HOWGREAT-THOUARE looks a nice horse in the making, and after chasing home his fleet-footed stable companion RUNJOHNNYRUN in a fast-run 1100-metre race last Saturday, having DOUBLE BUTTON just behind in the process, should make no mistake.