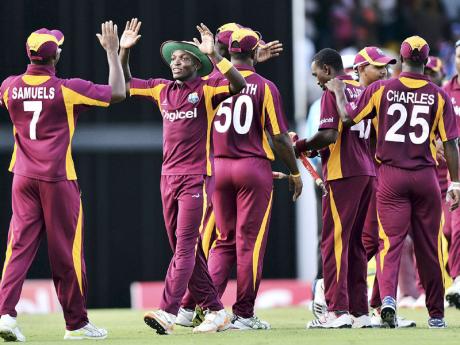 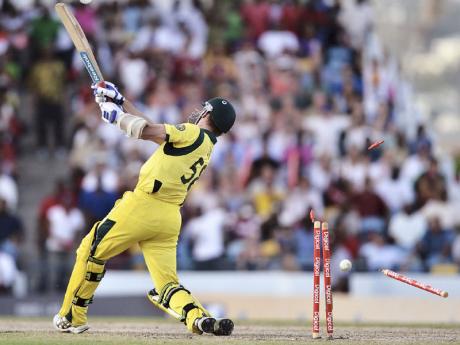 BRIDGETOWN, Barbados (CMC):For the second time in as many weeks, West Indies walked away with a share of the spoils after they beat Australia by 14 runs to tie their two-match Twenty20 international series yesterday.

Opener and Man-of-the-Match Dwayne Smith stroked a delightful 63, but West Indies lost their way to stumble to 160 all out with two balls remaining, after winning the toss and batting at Kensington Oval.

Fellow opener Johnson Charles uncorked a breezy 37, but Dwayne Bravo was the only other batsman to reach double figures with 23 and it required 24 balls.

Australia then appeared on course for an easy victory when opener David Warner slammed 58 to propel the visitors to 80 for two in the 12th over.

However, off-spinner Marlon Samuels (3-23), made decisive breakthroughs before speedster Fidel Edwards (3-23), two wickets in successive deliveries at the start of the 19th over, helped to restrict the Aussies to 146 for nine off 20 overs.

West Indies were off to a flier when Smith combined with Charles to give them a rollicking start, putting on 72 from 40 balls for the first wicket.

The right-handed Smith, enjoying a new lease on life in recent months, faced 34 balls and counted six fours and four sixes, while Charles scored 37 from 21 balls, comprising six fours and a six.

Smith spanked three fours in left-arm spinner Xavier Doherty's second over which cost 18 and then tore into pacer James Pattinson, smashing him for three sixes in the ninth over that cost 20 runs.

The first two sixes disappeared over wide long-on while the third was straighter, bringing up his first international T20 half-century, from 30 balls.

Charles was characteristically aggressive, smashing his first ball through square on the on-side off Pattinson for four before also audaciously lifting Lee over point for six.

He seemed in cruise mode when he holed out to Daniel Christian at long-off off Watson in the seventh over.

The experiment of sending the big-hitting Kieron Pollard at number three failed miserably as he made just one from three balls.

Smith and Bravo then consolidated in a frenetic third-wicket stand of 30 runs off just 10 balls before Smith attempted to clear the ropes with Doherty for the second time in the 10th over and was held at long-on by David Hussey.

With Smith gone, Australia put the brakes on the Windies scoring as the next 60 balls yielded just 50 runs and coughed up seven wickets.

West Indies hit back early when Edwards had Watson caught at first slip by captain Darren Sammy without scoring with one run on the board, off the sixth ball of the innings.

Warner then partnered with captain George Bailey to patch up the innings in a 63-run second-wicket stand off 39 balls.

The left-handed Warner struck five fours and three sixes off 43 balls, outshining Bailey whose 24 came from 18 balls and included two fours and a six.

Samuels then made two decisive strikes, getting Bailey to top-edge a sweep to Danza Hyatt at square leg in the eighth over and then snaring Mike Hussey, caught and bowled for 14, to break a promising 25-run partnership with Warner in the 12th over.

Four balls later, Warner was spectacularly run out by Bravo's direct throw from mid-on as he attempted a second run and his dismissal slowed the scoring with the Aussies adding just 35 from 31 balls in a partnership between David Hussey (19) and Wade (17).

With the run rate climbing, Samuels struck again, claiming Wade in the 18th over before Edwards had Daniel Christian (three) caught at cover by Sammy and then bowled Lee the very next ball to put West Indies on top.

With 19 needed from the last over, Bravo picked up the wickets of David Hussey and McKay (seven) to make sure of the tied series.