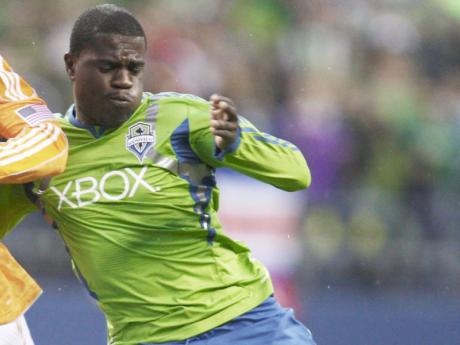 Ocho Rios native O'Brian White became the first major disappointment for Jamaicans in Major League Soccer (MLS) after his club bought out the injured striker's contract, releasing him from its 2012 season roster.

White, recovering from surgery to remove a blood clot in his leg, will continue to rehabilitate at the Seattle Sounders, which will fulfil their salary obligations to the player.

"We fully support O'Brian and will continue to help him rehabilitate with the hope he can resume his playing career," Adrian Hanauer, Seattle's owner and general manager, told the team's website.

White started only seven games for Seattle in 2011, scoring twice.

Another Jamaican set to miss this weekend's MLS action is Vancouver Whitecaps' rookie Darren Mattocks. The forward is recovering from burns suffered in a kitchen accident.

However, national striker Ryan Johnson will try to get Toronto FC (TFC) their first points of the season today against Columbus Crew. Johnson has helped TFC into the semi-finals of the CONCACAF Champions League, but TFC lost their opening two MLS games.

He could face Reggae Boy Shaun Francis. The left back has started both games for Columbus so far - a win and a loss - but his place in the team is being challenged.

Goalkeeper Ricketts leads MLS with a dozen saves and was chosen for honourable mention on the league's Team of the Week after the last round.

Thomas has not played this season.

National player Lovel Palmer is also in action today for Portland Timbers against Real Salt Lake (RSL). Portland are coming off a loss.

So, too, Colorado Rapids and Omar Cummings. However, the national forward notched his first goal of 2012 with a beautiful strike against New York. Tomorrow Colorado host Chicago Fire.

Robin Fraser was another Jamaican finding success last week. The head coach of Chivas USA averted a three-game losing streak with a win over RSL to stave off rumours about his job security. Tomorrow Chivas face red-hot Sporting Kansas City and their perfect 3-0 record.