Whew!Dacres relieved to throw off pressure 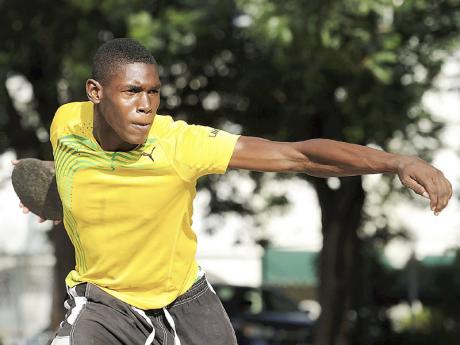 If you think competing at one of the world's most revered track and field athletics championships is easy, you just have to speak to one of the country's brightest stars to understand just how much strain is involved.

Calabar High's Federick Dacres, a discus gold medallist at the IAAF World Youth Championships in Lille, France, last year, stepped out of the discus ring on Thursday with a ton of pressure and the expectations of an entire school population lifted from his young shoulders; at least for now.

"It is definitely pressuring," said Dacres after his 60.43m throw handed him the gold medal in the Class One discus final and the nine points that his team was banking on for their title campaign.

"You do it, youth, one more for Calabar!" an elated Traves Smikle - the national junior record holder and now a Calabar 'Old Boy' himself - said greeting his protégé in elation after his triumph.

The importance of the win was underlined long before Dacres made his first attempt, with Calabar's head coach Michael Clarke and throws coach Julian Robinson both underlining the necessity of the throwing corps to the team's Champs chances.

However, with the constant reminder of the support of his mother Claudette Morgan and his coaches and friends, Dacres, despite a less-than-spectacular showing, managed to hold his nerves and deliver for his school.

"My mom couldn't be here, unfortunately, but I know she is always supporting me and she is always in my heart," he added, with a smile.

A Win is a Win

"I felt I could have done better, but a win is a win and I kind of feel good that I was able to win despite not getting the performance I was hoping for," said Dacres.

"There was a lot of pressure because our team needed these points," he continued. "We have had some minor setbacks, but we know that we have to perform because we are the base of the team, and the team is built upon us as throwers, they depend on us.

"We knew this coming in, pressure was there, but I believe we dealt with it well enough," he added, before summing up his performance.

"I felt I could have gone maybe 63 metres, but again I'll take the win and I am happy to have contributed to the team. My team needed the points so that was a major push, my coach and friends were always supporting me," Dacres added.

Dacres and Miller are also competing in the Class One shot put event where they are also expected to score big points, with Pan American Junior champion Miller this time the favourite and Dacres tipped for the bronze medal.