I wanted that record - Boland 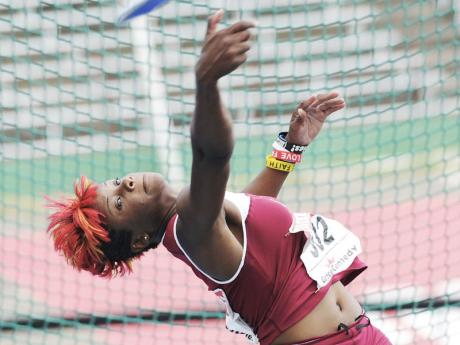 Gleneve Grange of Holmwood Technical hurls the discus while competing in the girls' Class Two event at the ISSA/GraceKennedy Boys and Girls' Athletics Championships at the National Stadium yesterday. Grange won the gold medal with a throw of 43.32 metres.- Ricardo Makyn/Staff Photographer

Xavier Boland sat alone, dejected and clearly at war with himself, after competing in the boys pole vault open at the Inter-Secondary Schools Sports Association (ISSA)/Boys and Girls' Athletics Championships on Thursday evening inside the National Stadium.

It was hard to believe that he had just won himself a second consecutive gold medal in the event, along with nine extremely valuable points for his school, title-chasing Kingston College.

A fierce competitor, Boland explained that while he was grateful for the win, the 4.20 metres winning mark that he achieved was nothing close to his ambitions.

The 17-year-old was expecting to break his own 4.46m meet record, which he established at last year's championships. He has bettered that mark on numerous occasions already this season at training and at the Camperdown Classics, where he registered his official personal best of 4.60m.

"I think I could have gone to five metres," said Boland, still very annoyed with himself. "I have bettered this record several times in training and by far too, I did 5.00m up to last week, so I am very disappointed with myself.

"The conditions weren't perfect, but I could have salvaged a better jump despite that," Boland pointed out. "I didn't really get into my jumping yet, but it's just one of those things and maybe I'll get it some other time."

one more year of champs

Some other time is, however, not guaranteed, as he is yet to decide whether he will be hanging around for one more year of Champs.

There was some consolation nonetheless - nine points for his school in a championship race that is expected to go right down to the wire.

"Today wasn't exactly a bad day, but it was certainly an off day for me," he went on.

He has not tasted defeat all season, winning all five of the events that he has competed in to date.