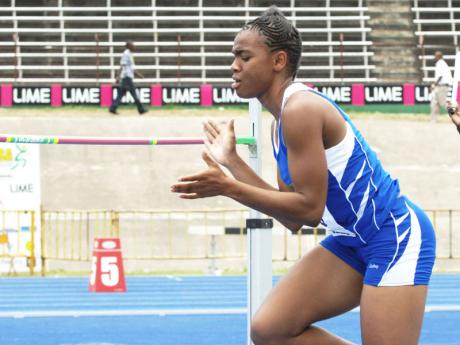 Gentles defeated Eagles' Paulette Barrett 2-0 in the best-of-three final to cap the $8,000 prize. Barrett secured $4,000 for placing second in a field of 14.

Meanwhile, the Jamaica Skittles Federation's next major tournament will commence in the latter part of April. It is the Wray & Nephew-sponsored competition which offers lucrative cash prizes. Eagles from Molynes Road are the defending champions.

More than 25 primary and prep schools from Kingston, St Andrew and St Catherine are expected to participate. The defending champions are Naggo Head Primary. Admission: $100 adults and $50 children.

Rivoli showed no signs of slowing down as they defeated New Green 1-0 at Spanish Town Prison Oval last weekend to avenge a loss that has been the only blot on their record in 13 games so far in the South Central Confed Super League.

Jeremy Nelson got the lone strike in the 38th minute as Rivoli maintained their 10-point overall lead in the 12-team competition.

Ross Burton also made it a good weekend for St Catherine teams, as his 84th-minute goal at Albion Oval allowed home team Meadows to edge Naggo Head 1-0. More importantly, it confirmed another semi-final spot from the parish in the semi-finals.

St Catherine teams are also poised to ensure a clean sweep of all four spots. Newcomer Royal Lakes cemented second place on 22 points behind Rivoli after travelling to Clarendon to defeat Monymusk 2-1.

With just two matches to go, only New Green can deny Royal Lakes a semi-final spot from Zone A. The Manchester team, however, must win their remaining two games, in addition to getting three points for an aborted away game against De La Vega two weekends ago. In a game which De La Vega hosted, a stone was thrown which allegedly hit the assistant referee just moments after New Green had equalised. The matter is still before the competition's committee.

In Zone B, from which Meadows have advanced, the battle for the final spot is between Spartan of Clarendon and Naggo Head of St Catherine. Both are on 15 points, with Spartan having a slightly better goal difference.

Mile Gully hold a two-point lead over Kendal, their mid-season final conquerors, with three games to go before the semi-finals of the Captain's Bakery & Grill- sponsored Manchester Major League.

Mile Gully easily brushed aside bottom-place Starliner 3-1 but relinquished a four- point lead after being held to a 0-0 draw by a resurgent Georges Valley.

Georges Valley are out of the running for a semi-final spot but have gained four points in two matches, including an upset 1-0 away win over Porus, who had displaced Kendal from second for just one single round.

Mile Gully and Kendal have already secured two of the semi-final spots, with Porus (22 pts) and Comfort (17 pts) favourites to take the other two.

Hillstars and unknown Cross Keys went on goalscoring sprees as the Manchester Under-17 competition, sponsored by Power Services Ltd, kicked off last Saturday at Kirkvine.

In other results, Old England and Flava ended 0-0, while Kendal edged Land Settlement 2-1.

Treasure Beach's goalscoring spree in the St Elizabeth Co-op Credit Union Division One football was stalled after Steppers held them to a 1-1 draw in the feature game, hosted at Black River High on Wednesday.

In three previous games, Treasure Beach had netted a whopping 16 goals. They have now scored 18 overall while conceding two. They are also one of two unbeaten teams after five games and sit at the top of the league of 12 teams on 11 points.

Middlesex are also unbeaten but after a 0-0 draw against Round Hill (eight points) on Tuesday are fourth with seven points after five games. In another result, Rocky Hill defeated New Holland 2-0. Two games were washed out earlier this week due to inclement weather across St Elizabeth.

Wednesday's games: Middlesex vs Treasure Beach at New Holland; Round Hill vs Steppers at Munro College.

Thursday's games: Northampton vs Prospect at Lyco; Rocky Hill vs Longwood at Lacovia.

Jamalco back on top in Clarendon

The leadership at the top of the Captain's Bakery & Grill-sponsored Clarendon Major League changed hands for the second time in three rounds, with Jamalco reclaiming top spot over rivals and neighbours New Bowens.

Jamalco took advantage of playing two games this week, including an early 13th-round fixture against Rock River, to claim maximum six points which pushed them to 30 points. This is two more than New Bowens, but Jamalco may not celebrate further than this weekend since New Bowens will play bottom-place York Town on Monday.

York Town, with just three points from 12 games and almost certain of relegation, will host the match which New Bowens should win to regain the lead.

Third-place Four Paths also have a glorious chance to go to 30 points when they play away to Gimme-me-Bit tomorrow. Gimme-me-Bit, despite being fairly positioned at sixth on 12 points, gifted New Bowens with three points last weekend after a no show.

Black River have been confirmed as the first semi-finalists in the Wray & Nephew- sponsored St Elizabeth Major League with five rounds left to complete the return phase of the preliminary round.

Braes River, who defeated Newell 1-0 in an away encounter last week, are on 23 points.

The best positioned teams to take the other semi-final spots are Appleton, Tafari Lions, Newell and Parottee. Knoxwood, who are on four points, will be relegated.

Rivoli, Royal Lakes ahead in Confed U20

The St Catherine pair of Rivoli and Royal Lakes have secured two straight wins in the South Central Super League.

Rivoli are yet to concede a goal, as they followed last weekend's season-opening 7-0 onslaught against Monymusk with a 2-0 win over New Green at Prison Oval. It was New Green's first loss after an opening 2-1 win over De La Vega at Brooks Park.

Royal Lakes had their second win when two goals from Romain Palmer lifted them to a 2-1 win over Monymusk. They had opened their campaign with a 1-0 win over parish mates Bodles.

In other results, Naggo Head needed a stoppage-time goal from Desmond Watson to earn a 1-1 draw against Meadows, while it ended 0-0 between De La Vega and Bodles.

Mineral Heights made it two wins from two, defeating Osborne Store 2-0. Toll Gate, who lost 0-1 to Mineral Heights in the opening round, rebounded with a 3-2 win over Scotts Pass.

Hazard Primary followed up their opening 3-2 win over May Pen with a 1-1 draw with Denbigh.

In the two other results, Race Course and Allen Primary ended 0-0, so did Hayes and Moores.

This match is a repeat of last year's final. This game can go either way as both teams possess players with match-winning skills. The first semi-finals at 9:30 in the morning pits Bethel Born Again against 2009 champions Old Harbour New Testament. Old Harbour should start favourites as they have in their line-up two of the most explosive batsmen in the tournament: Devoy Smith and Andre Henry.

Findlayson and Branford defeated Robert Moore of Hurricane and O'neil Duffus 10-7 in the final.

The pair pocketed $15,000 for the win while runner-up pair Moore and Duffus collected $10,000. The third-place duo of Gilbert Robinson and Leroy Taylor received $3000, and fourth-place pair Michael Wray and Lincoln Watson got $2,000.

Eradication and third-place Caribbean Classic will highlight tomorrow's round of the Impulse-sponsored Portmore/St Catherine Domino League in Gregory Park.

In other matches, leaders Fort International, who have amassed 56 points thus far, have an easy game against last-place Garveymeade Sports Club at Passagefort Drive.

Hurricane will have a torrid time as they host second-place Ackee Pod (52 points) on their Bayside home base; Colours Sports Club welcome Masterpiece at Port Henderson Plaza; Island Special Constabulary Force should get past Westchester Nuckuz at Port Henderson Road; Black Rooster are at home against Correctional Services; while Seamaster will fancy getting full points from their fixture against Ken's Wildflower. All matches begin at 11:30 a.m.

Hellshire United earned the right to meet Garveymeade in the final after they booted East Portmore Portals from the Colin Fagan-sponsored Portmore Division Two knock-out competition at the Passagefort field on Sunday. Rohan Grant scored in the second half of extra-time for Hellshire United after a fumble by Portals' goalie Emroy Neil. The game ended on a sour note when Hellshire's Mark Knight was given a straight red card by referee Dave Peterkin as he struck Portals' Neil Reynolds seconds before the final whistle.

Hellshire's opponents in that final will be Garveymeade, who shocked Westport 4-1 on penalties in the second semi-final at the venue.

Rush on for points in Division One

Crucial points can be earned in the final set of preliminary-round matches in the LIME St Catherine Football Association Division One League tomorrow.

Leaders Upfront United (30 points) have finished their fixture and have already qualified for the semi-finals. While the first- and second-place teams have secured a berth in the next round, three teams are battling for the remaining two spots.

At Old Harbour Bay field, the home team and mid-season champions need to beat Travellers (24 points) if they hope to qualify for the next round. Travellers need only a draw. Albion United just need to avoid defeat against relegation-bound Benbow United of Cheesefield to take up a semi-final spot. All games begin at 3 p.m.