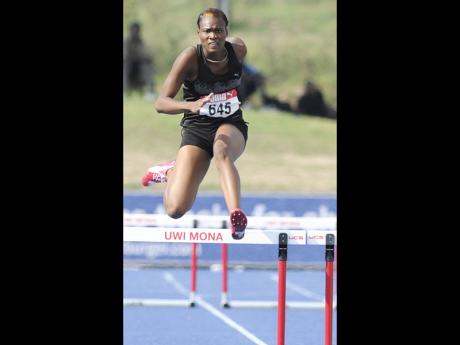 She made her name at the Inter-Secondary Schools Sports Association (ISSA)/GraceKennedy Boys and Girls' Championships, and a year after saying goodbye to the meet, former Edwin Allen standout Ristananna Tracey continues to make strides professionally, after striking a four-year deal with sports goods manufacturing giants PUMA.

Now, with increased motivation, the youngster is looking forward to the upcoming season with renewed drive and focus.

"I am motivated because to know that a company like PUMA has shown this faith in me, and that I now have a contract and all, is a great boost for me as I look to make the Olympic team," Tracey added. "This tells me that I have a special talent and that it will continue to develop if I put in the work, and that there are persons who really believe in me."

The international sports lifestyle brand on Thursday announced a partnership with the exciting 19-year-old 400m hurdler, which will see the Racers Track Club star endorsing the brand's lifestyle and performance running apparel through to the 2016 Olympic Games.

"I am thrilled and honoured to partner with PUMA. The brand has a real presence among Jamaican runners and is a huge supporter of our sport," said Tracey. "I am excited to join the PUMA team and wear the brand's sport and lifestyle products both on and off the track."

Kock was also delighted with the partnership.

"We are pleased and proud to have Ristananna join our talented track and field family," said Rolling. "Her impressive performances in 2011 demonstrate her strength and speed - she will undoubtedly be one to watch in the world of athletics."

Rolling also welcomed the deal and underlined that it represented the company's commitment and belief in Jamaica's future.

"She is for sure one of the youngest that we have signed," said Rolling. "We are very excited, Ristananna represents the future of athletics for Jamaica and we expect a lot of good things from her in the future, maybe it can also happen this year, but we are looking at the future. "

PUMA has a long-standing relationship with Jamaican athletics and are current sponsors of the Jamaica Olympic Association and the Jamaica Amateur Athletics Administrative Association. They also support several high schools and events in Jamaica.

They are also partners in The Gleaner's 14-month track and field coverage project, 'Daegu to London.'