An art exhibition fit for a king 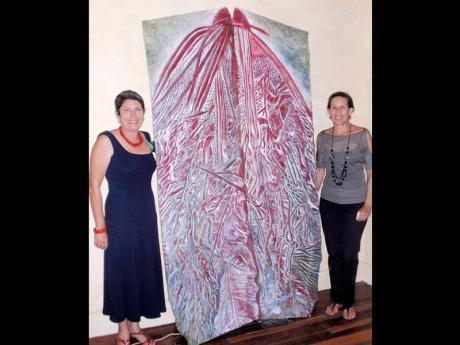 Catherine Handa (left) with artist Laura Facey and her work inspired by a masquerader.- photos by Laura Tanna 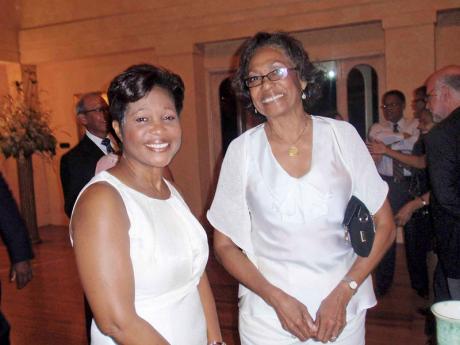 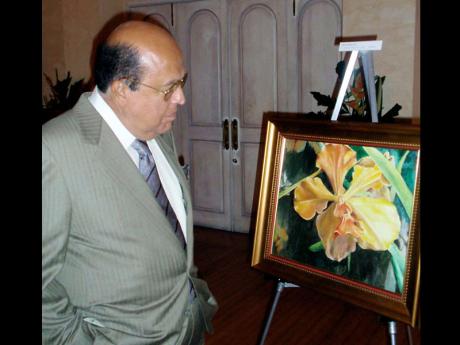 The recent royal visit to Jamaica was such an acclaimed success in the foreign and local press that another successful event associated with King's House was almost overlooked. International Women's Day did not go unnoticed by Their Excellencies. The Most Honourable Lady Hall may no longer reside at King's House but her talent as an artist and her spirit of public service are still recognised by those who reside there now!

Upon assuming office, Sir Patrick Allen asked if Lady Hall would be kind enough to once more organise an exhibition of art for sale to raise funds for the maintenance of the historic century-old residence. Lady Hall had originally conceived the idea of doing this when Sir Kenneth Hall was governor general, and the first of these events was held in March 2007.

Although the date of March 8, 2012 had been selected for the recent exhibition long before the date for Prince Harry's visit was known, Beverley Bell-Clarke and the rest of the King's House staff rose to the occasion, and having entertained the prince in a manner to make all Jamaica proud, no sooner did he leave for Montego Bay than the King's House ballroom was transformed into a showcase for many of the island's foremost female artists, in keeping with the spirit of International Women's Day.

Lady Hall, better known to many as Rheima Holding Hall, is a past principal of the Edna Manley School of the Visual and Performing Arts and maintains strong friendships with her colleagues in the art world. She called upon them to participate in the event, with part proceeds going to The King's House Foundation. Her daughter, Gillian Scarlett, provided black and white drawings, Laura Facey made a strong showing with sculptural works, Norma Harrack, Allison Sinclair and Vilya Thomas demonstrated the variety possible in ceramics, while painters included not only Rheima Holding Hall, Susan Alexander, Kay Anderson, Hope Brooks, Lois Sherwood, but also Valerie Bloomfield, whose portrait of the late John Maxfield has enchanted people for decades. The works were beautifully displayed with the assistance of Dian Watson, who proved a formidable sales lady!

First, the exhibition had to be opened, and though Sir Patrick was in attendance, who better to do the honours than The Most Honourable Lady Allen? She spoke eloquently of the significance of the occasion in keeping with the theme of International Women's Day. Chairman of The King's House Foundation, Dennis Lalor, noted that while working to maintain the historic residence, this particular evening supported outstanding female artists who preserved Jamaican culture through their art.

He thanked the Jamaica National Building Society (JNBS) for once again sponsoring the event, and noted that Caribbean Producers, Continental Bakery, Loshusan and Family Pride Supermarkets had all made contributions to the Wine and Cheese reception which followed, with libations offered by Paul Hansworth 1876 Wines. He thanked Grantley Stephenson, head of the Consular Corps, and the Corps for their support, as well as that of the many King's House Foundation board members who gave assistance and attended in full force. He announced that the sole painting on display by a male artist was a watercolour landscape donated by Barrington Watson for a silent auction, an innovation at the exhibition.

The Gleaner Company, Independent Radio Company and Jamaica Information Service helped to publicise the evening so that ticket sales and proceeds from this exhibition were the most successful thus far, outstripping both the 2007 and 2008 fundraisers. Indeed, Rheima Holding Hall's gorgeous golden orchid painting was virtually the first to be sold, leading the way for an outstanding celebration of support by members of the public and private sector coming together to assist the Government in providing not only a suitable residence for the Head of State, but also protecting an important part of the country's visual treasure trove.

Many of the visitors who attended did so to view the splendour of the ballroom itself, its chandeliers illuminating walls upon which portraits of leaders from days gone by stare back at one, each with fascinating stories to tell and with a new portrait soon to find its place among them, but more on that another time.

Jackie Ranston, author of Behind the Scenes at King's House 1873-2010, was in attendance, confiding in me that two portraits are still incorrectly labelled! Her fascinating book, published by JNBS, whose proceeds also go towards The King's House Foundation, was also on sale, though it was the art and visual artists who were the stars on March 8, thanks to Their Excellencies.