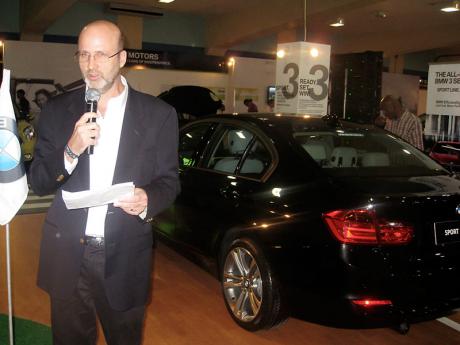 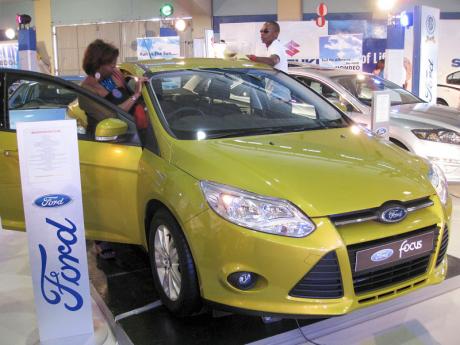 A lady gets into a 2012 Ford Focus even as it is given a rub down at the ADA Motor Show. 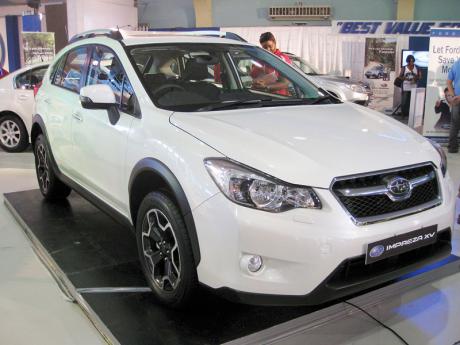 The Subaru which was introduced by KIG at the ADA Motor Show. Photos by Mel Cooke 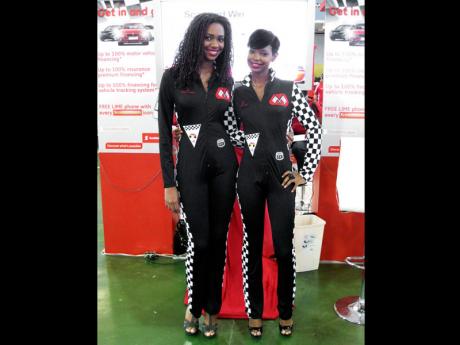 Scotiabank put its promotional ladies in racing gear designed to get the men revved up. 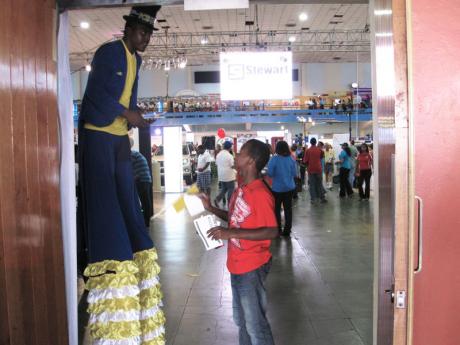 NCB went high with their promotional efforts to stand out at the 2012 motor show.- photos by Mel Cooke 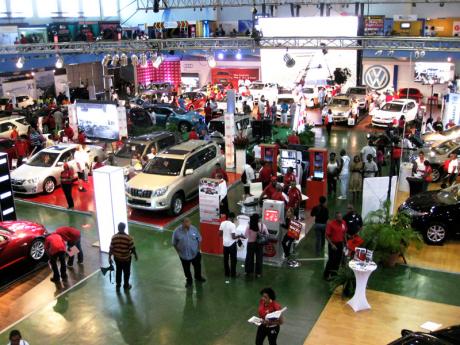 A view from above the cars on display at the Automobile Dealers Association Motor Show 2012, held last weekend at the National Arena, St Andrew.
1
2
3
4
5
6

Chairman of the Automobile Dealers Association (ADA), Kent LaCroix, was a satisfied man when Automotives spoke to him a few days after Motor Show 2012. Running from March 23-25 at the National Arena, St Andrew, the new-car display was the first since the ADA broke with its biennial schedule, not holding a show in 2009 as was due after the 2007 staging.

While the attendance figures of approximately 10,000 over the three days were not up to the 2007 show's numbers, LaCroix points out that for many of those who came it was not a matter of browsing, "but there were people who were serious about purchasing a car and not an excursion".

So, with a more purchasing than sightseeing-oriented public, the dealers came out happy. "Deposits were paid on the spot. Some of my reps have said to me, we have been in this business 10 to 15 years and we have not been to a show where we have seen so many people making deposits," LaCroix said. And this does not take into account those people who the representatives of various financing agencies have made contact with and will be doing follow-up procedures.

While there have been at least two used-car shows and one large-scale new-car show since Motor Show 2009 was put off, as well as several single dealership and financing institution shows, LaCroix said there seems to have been a void. "There is a feeling that because we have not had a show for so long there was a pent-up desire," he said. As for the other shows that have been held, he said "None of them had the volume of vehicles and participants as our show. We did not have to beg anybody to participate".

The stars seem to be aligned for the ADA's members, as LaCroix points to the customary pre-Budget jitters as an extra motivating factor to push customers to make new-car purchases sooner than later. And while there were many persons inside the Arena, LaCroix pointed out that there were those persons who came to the show but did not enter the building, as the commercial vehicle section was outside.

"There were farmers and so on who came for a specific reason and off they went," he said.

It was not only the vehicle dealers who had a good response but also the providers of related products and services and LaCroix said that is "one of the things that is gratifying to me and the ADA. We have asked for their comments on the show, good or bad. We can't find one bad".

The dealers were given very strict instructions about how the booths should be organised in order to ensure the free flow of persons looking at cars. In addition, after years of experimenting with different types of banner arrangements and having to deal with variations by dealers, LaCroix said "This time we said no banners. It worked. It was clean. It was not sloppy".

Pent-up desires apart, he also attributes the Motor Show 2012 response to "the hype, in terms of the publicity that was done. We had all the media support. Even those who were not sponsors were in the thick of things".

With the show having made an emphatic return, LaCroix said there are now considerations about going west with the new-car display, having a show in Montego Bay, St James, "this year preferably, while everything is going good".


Headlines Delivered to Your Inbox