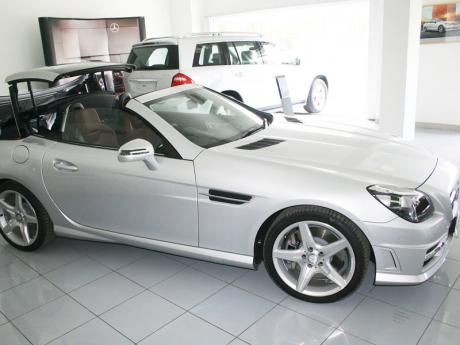 The 2012 Mercedes-Benz SLK with the top halfway up.- Photo by Christopher Serju

Mercedes-Benz SLK a wonderland of gadgets

Sitting in the 2012 Mercedes-Benz SLK checking out the features, there is the chance you could get so comfortable you forget you're there to drive. I know, because it happened to me as I badgered Silver Star Motors Limited Sales Executive Thomas Hall about the panoramic vario-roof with Magic Sky Control, then got caught up in his explanation about the Internet-enabled multimedia system COMAND Online.

Resisting the urge to touch everything in sight is difficult. Temptation abounds. Pressing back against the Napa leather-covered seat, I first toy with the control for the roof and watch as it changes from opaque to translucent in flash, then change it back. I do it again, just for fun this time. I'm fascinated by the variety of applications the multimedia system facilitates with Bluetooth technology, as Hall explains how to navigate the Internet, pointing out that the navigation system and radio are voice controlled.

Finally, with a lot of prompting from Hall and Silver Star General Manager Jacqueline Sangster, I reluctantly pry myself from the comfort zone to watch the sales executive demonstrate some of the keyless operations. Swiping his hand across the lock on the driver door, he locks and unlocks, pointing out that the window can also be operated in this manner - the catch being that you need to have the key in your possession (as in your pocket or hand). You can also open and close the roof from outside.

Sangster explains that the vario-roof is making its premiere in Jamaica. "No other cars anywhere else have it yet. When we requested that feature and they said couldn't be done we cancelled our entire order, and then they came back to us and said okay. So this is a first," she said.

As if I wasn't already impressed!

The car is powered by a 1,800cc turbocharged engine, with a seven-speed automatic transmission and a manual mode, dubbed 7-tronic, which can be controlled by shifters on the steering wheel. Talk about creature comforts!

I am already sold on this vehicle which, at $8.45 million (about $7.4 with duty concession), is well worth its weight in gold. Of course, there is intelligent lighting with which the headlamps automatically adjust when they detect the headlights of oncoming vehicles and then revert to the previous brightness afterwards. Other features include the rear and front bumper sensors, which are part of the overall parking guidance system.

Resting regally astride a set of 245/35/18 wheels, the 2012 Mercedes-Benz SLK is beautiful to behold, with the broad radiator grill a standout.