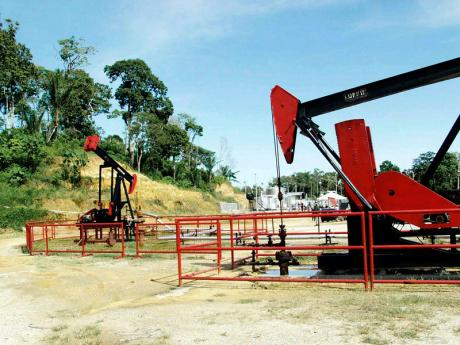 Oil equipment at the Petrotrin refinery in Trinidad. File

State-owned oil company, PETROTRIN, says it has discovered a well with an estimated 48 million barrels of crude in shallow water wells just off the coast of Point Fortin.

PETROTRIN officials said that the find is the best in the last 10 years and Prime Minister Kamla Persad-Bissessar told reporters that the oil find reaffirms that indeed "God is a Trini".

"As a result of the jubilee discovery by PETROTRIN as a state- owned company, decisions can be made faster and easier and you can be assured there will be no squandering of these very precious resources but every penny derived will go towards genuine people-centred development in several areas," she said.

"Let us first be sure to accept with humility the intervention of a purpose far greater than ourselves and to give praise where praise is first due to Almighty God for what he has bestowed upon this nation at this time," she said.

The prime minister suggested that PETROTRIN convene a day of "prayerful gratitude" to recognise the contribution of the company's employees.

PETROTRIN's president-designate, Khalid Hassanali, said the company, which was engaged in aggressive drilling, discovered the oil off the Gulf of Paria four miles west of Point Fortin in 60 feet of water.

Hassanli said a profitable mix of heavy and light crude oil result in positive developments for the energy sector and downstream industries.

"We have a combination of heavy oil, which is very viscous and the lighter oil. The lighter oil can be used to dilute the heavy oil so when you make that type of combination, you get a new composite crude."

"We are at a stage where the refinery is a lot more versatile, where the appetite for crude input and the ability to manufacture the types of products that the world and the Caribbean and local economy can take," he said.

He said the find will also increase the local production profit margins.

The refinery capacity stood at 150,000 barrels per day, but only 50,000 came from local fields while the other 100,000 was imported at prices that are subject to freight, he added.

"Therefore, the higher the proportion of indigenous crude it will enhance our profitability," he said.

PETROTRIN does not sell raw crude, but refined products.

Persad-Bissessar said this "historic discovery" augurs well for the country in many ways, noting that the price for oil on the global market.

"This revenue will be used to boost many of the developmental projects by my government. The location and depth of the reserves will allow for earlier-than-usual production to begin so the benefits to be derived will impact positively on our economy sooner than ever," she said.

"The news will certainly create a buzz in the sector as the provision of new geological data could lead to even more discoveries," said the prime minister.

Energy Minister Kevin Ramnarine said that the discovery comes on the heels of a discovery by Bayfield off the East coast of Trinidad three weeks ago.

He noted that Bayfield's find was 32 million barrels of crude oil and PETROTRIN owns 35 per cent equity of the block Bayfield operates.

Ramnarine said that a Canadian energy company, Parex, is in the process of drilling three wells in Moruga.

He said he was anxiously awaiting the completion of PETROTRIN's 3D seismic programme which will help identify and unlock more natural resources which will lead to an aggressive campaign on land in 2013.

"There are many who believe the deeper horizons on land particularly below 6,000 feet could hold tremendous potential for this country of an entire new oil province which we never really tapped into," said Ramnarine.

Government has approved the launch of the 2012 deep water bid round and have already received 22 nominations for deep water blocks off the East coast and the North coast of both Trinidad and Tobago.