A night of poetry well done 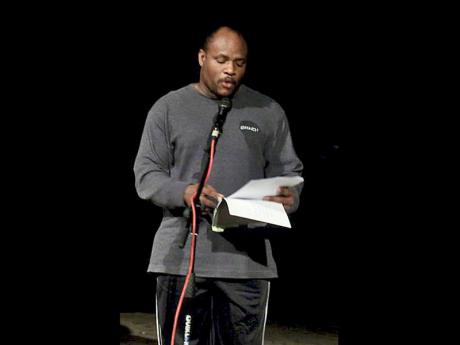 Featured poet Mel Cooke in performance at the World Poetry Reading at the School of Drama amphitheatre last Thursday.- Contributed

The piercing silence of the night was broken on several occasions by the poetry which filled the air.

Leading up to the Actor Boy Awards, Jamaica Association of Dramatic Artistes (JADA) in collaboration with the International Theatre Institute (ITI) Jamaica, presented another instalment of week-long celebrations.

It was World Poetry Reading night and the Edna Manley College of the Visual and Performing Arts' amphitheatre was the venue where several poems were delivered well.

All poems, except those by Jamaican Mel Cooke, were written by overseas poets from ITI member countries.

The self-titled 'Word Terrorist', the featured act of the night, was exceptional, delivering poems which provided insight on 'Uncle Sam', being a child of the '70s, the connection between lovemaking and housekeeping and the influence of the security forces on shaping Jamaica's history.

His first selection seemed to be his best as throughout its length the audience enjoyed it.

He made it known from the start that although the focus of Jamaica 50 was the year 1962, his calendar was a bit different, he was fast-forwarding eight years to the 1970s.

"Those of us who were born in the first 10 years of Jamaica's Independence, our critical childhood and teenage years were shaped by the 1970s, that fertile and ferocious period where we were caught up in the ideological struggle between capitalism and communism," said Cooke before making a smooth transition into the poem.

"I born 20 years after '51 storm/ I born nine year before '80s war/ I born when toilet paper did short/ In '76 I neva understand what state of emergency is/ When I born in the decade that preview what Jamaica is/ I am child of the '70s," reads Cooke.

He later abandoned that cloak to impersonate an "executive member of al-Qaeda, aggressive lyricist questioning atrocious, unjustifiable excesses in defence of America".

In that humorous poem, he threatened to, "guh up a Liguanea up a di visa place/ Squeeze mi finga an jus blow some poem inna dem face/ If dat nuh work gimme likkle time/ Mi working on the mumma of all boom ... poem".

Earlier in the night, the readings were opened by the Tableaux Centre for the Performing Arts' Renae Williams and Crystal Lattibeaudiere with Sudanese poet Al-Saddiq Al-Raddi's Theatre.

Tanya Batson-Savage delivered 'The Cab Prostitute' painting a short, but vivid image of the life of a prostitute before Jean Small presented Joshua Idehen's 'Lost In The City'.

Several readings came from others which included Michelle Serieux, the Independent Actors Movement and Craig McNally.