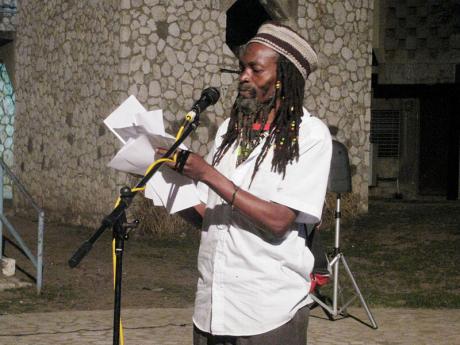 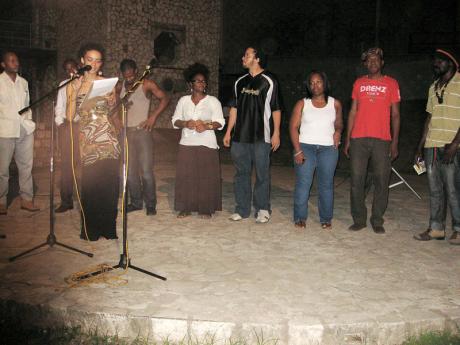 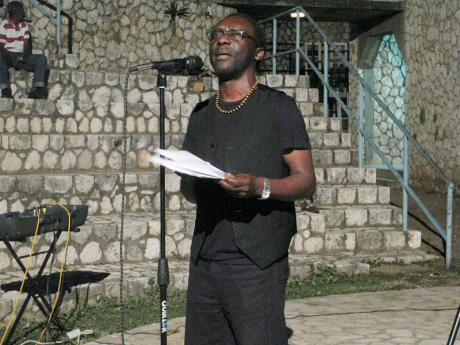 Owen 'Blakka' Ellis in his guest-poet performance at the Poetry Society of Jamaica's March fellowship on Tuesday at the Edna Manley College of the Visual and Performing Arts.- Photos by Mel Cooke
1
2
3

Much of Tommy Ricketts' introduction of Owen 'Blakka' Ellis at the amphitheatre, Edna Manley College of the Visual and Performing Arts (EMC), on Tuesday night was personal recollection of a then dreadlocked Ellis' fiery exploits while a student at the institution. Prime among those were Ellis' role in insisting that a lady who sold food there should not be made to relocate.

And at points during Ellis' reading at the Poetry Society of Jamaica's March 2012 fellowship a chorus of voices joined in the poetry, evidence of his lasting influence as a staff member there.

Ellis' extended reading, in which concepts of manhood played a significant role, also included his memories of Dennis Scott (after whom the theatre at the School of Drama is named) and poet Mikey Smith from EMC. Stating that he writes, not necessarily for his voice but others, Ellis donned Oku Onuora-type tones for one poem and invited Roots FM General Manager Donna Haynes to read a piece he wrote from the perspective of a philandering preacher's wife.

Following the event's accustomed format, the open-mic segment preceded the guest's presentation. There was a twist this time around, though, with the unexpected donation of a book purchase discount from I-Nation Books to the audience's choice of the best open-mic participant. That went to Dalton Spence for 'If the US Embassy was a Church' in which he spoke to the remarkably different behaviour of Jamaicans at the famed Liguanea facility, where "the spirit of patience and long-suffering" rules.

Another audience favourite was SNF, who declared himself a 'Corner Philosopher', advising before he started that his sagging pants were part of the presentation. He pulled them up during the strong piece, an exploration of the attitudes and treatment of young people which concluded "after all, we are generation extraordinary".

'Black Offspring' started "we cyaa take it no more" and Nabbie Natural utilised a few sheets of paper to good effect, saying "the poem start" as he rifled the pages. What he meant was made clear on Natural's opening line and refrain, "50 years of Independence and the pages of history still white".

Cherry Natural defined herself as an 'Intellectual Bad Gal' ("whe me sleep a whe me train, Kingston 2/popularly known as Mountain View") to close off open mic.

Blakka Ellis started with a libation around the perimeter of the circular performance area, Nabbie Natural pouring the white rum, the potency of which was evidenced by its strong smell. Ellis asked that persons call the names of some of those who have passed on, starting out with Dennis Scott and Mikey Smith. Trevor Rhone, Barry Chevannes, Joe Ruglass and Bob Marley were among the names that came from the audience and there was laughter when someone suggested "JLP".

Ellis explained that one of the things which drew him to the food vendor was that she said she did not sell "dumpling", but "talkingplin". That settled, he moved into memories of Mikey Smith and his outspoken personality having a role in his murder at the hands of political thugs.

Audience participation was key from the get-go, Ellis asking that the audience repeat the last three words of each stanza. The first of these was "space to stand", as he explored the capture and occupation of space. Ellis expounded on his wish that difference can be recognised and celebrated, saying "I don't want all my friends to walk like me and look like me". Explorations of the nature of God and its unexpected forms ("maybe God is in the eyes you ignore") preceded Ellis' writing on concepts of manhood.

"I am very angry about how we as a culture tend to put men in a box," he said.

And, Ellis said, "men spend almost every waking hour trying to prove and assert 'I am a man'", before doing 'Binary Board'.

'Tosh Stone' went out to his favourite Wailer, Peter Tosh, Ellis going into his Oku-style voice for this poem. Song for Dennis went out to Dennis Scott and Red Ribbon ended with the high-impact line "only thing positive is my test result".

back to his roots

Ellis went back to his Trench Town roots in recounting how, as people were ringing out 1975 and ringing in 1976, his home was set on fire by political thugs. "I have experienced war, so I can write about what happens after war," he said, reading the excellent Post-War.

On Your Marks is his literary observance of the Jamaica 50 celebrations and Haynes read the extended Sunday Coming, the pastor's wife persona commenting that her husband was "acting straight, but living lean" and was glib enough "to lift spirits/and lift up skirts".

The popular Tick-Tock got the chorale response and there was brawta as Ellis closed with Key Man, the humorous piece about the authoritarian attitude of one man who is a gate man, key man, watchman, security guard and many other titles, utilising a heavy hand to deny access to the premises to all who did not adhere to the rule: Staff Must Wear ID.