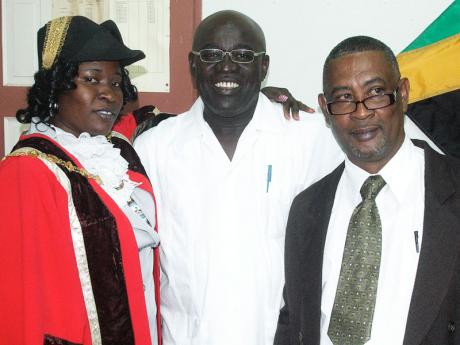 Lucea Mayor Shernet Haughton, renowned People's National Party (PNP) activist and former councillor Sheridan Samuels (centre), and Lester Crooks, who was an Independent candidate last Monday but has since crossed over to the PNP, pose for the camera after last Thursday's first sitting of the Hanover Parish Council.- Photo by Adrian Frater

CALL IT a landslide if you wish, but when one party wins 12 of the 13 parish councils and is in a tie in the other, that is, as we say in Jamaica, 'murderation'. The last time I saw a beating like that, the person had stolen a pair of ram goats and was sneaking away in the bushes with the nanny. It's a crushing defeat; orange upon orange like the water running off the surface of the deep bauxite the Jamaica Labour Party (JLP) is now mired in. For every seat the JLP won, the governing Peoples' National Party (PNP) won two in one of the most decisive electoral victories in my lifetime. On final count, assuming no changes after the magisterial recounts and challenges, the PNP has 151 to the JLP's 74.

In some cases, the results were not surprising. Westmoreland, the parish where the mayor boasted to me last year on radio that there were no Labourites there, can once again speak of 'standing room only' because there are no seats available. Over in the other extremity, St Thomas, the green man called Brown was swept out of town, and in Clarendon, the other Brown couldn't stick around.

The only colour which seems to matter is orange. So dominant has been the PNP that a discarded 'comrade' running as an independent in Hanover overflowed the bank of expectation, washing away the JLP opponent in Riverside. The victor, former Mayor Lester Crooks, is not a true independent because, unlike his estranged colleague, defrocked mayor of St Ann's Bay Ivan Anderson, he did not challenge the chosen PNP candidate who, like the millions of JDIP money, the 500 truckloads of sand and the $18 million which belonged to convicted 'Don' Zekes Phipps, disappeared without a trace on nomination day.

Crooks, like a lovelorn groom who is jilted at the altar, campaigned without his party's backing and used the fist as his symbol, to great success.

The hapless Anderson, on the other hand, ironically could not even get his own neighbours and friends that he grew up with to vote for him. Amusingly, he is based in Orange Hill.

Yet, the most telling and dramatic result is the decisive victory of independent Paul Patmore in the Lorrimers division in Southern Trelawny. Indeed, this is historic because not since the 1940s have we seen an independent candidate walk away with any seat other than that in his car.

Patmore is an enigma, a man who, according to the residents of the constituency, "rerk fi di people". A classic case of 'wha no dead no bury', this mortician did precisely that to the hopes of the JLP, which refused to put him forward as a candidate. Now with the seats split evenly, four apiece for the JLP and PNP, he is sticking to his guns and staying in the middle. He declared, with lucid unambi-guity, that in the choosing of the mayor for Falmouth, the parish capital, he would not be voting for any.

An extremely popular choice, this is the triumph of performance and substance over politics and is, for me, the best result of the entire election. With the PNP now having more of the popular vote in that parish than the JLP, it might not have to go to a coin toss. If this formula is used, then all mayors in the country would be PNP, giving the party effective control over the entire local government structure. The amount of power the PNP now has is scary, because there is no coherent opposition. The fact that the electorate can show independence of political allegiance and tomfoolery to vote for the person who is simply the best person for the job, however, gives a glimmer of hope that there is still a small seed which could germinate and grow in the event that a dictatorship attempts to raise its head.

As for the JLP, it must be not only reeling and shell-shocked from the defeat, but as an old man said to me, its president, Leader of the Opposition Andrew Holness, "mussi tun fool from di lick dem".

While I wouldn't blame the impact of the overwhelming number of fists for Holness' judgement, he has to take responsibility for now following his mentor Edward Seaga, in fast becoming a very unsuccessful leader at the polls. One might not recall, but Seaga refused to endorse Bruce Golding, the man Holness replaced, and spoke derisively of him and his leadership. However, Golding must be shaking his head as he continues to ride off into history. Laugh if you wish but Golding returned to the party in 2005, led the JLP to victory in the general election in September 2007 and followed it up with a second victory in the local government election in December. Compare winning two elections in four years to losing two in four months, or better yet, four general elections in 16 years, and the case is made that Holness ought to be called Baby Blinds instead of Baby Bruce. By the way, both Seaga and Holness pushed Mike Henry aside.

Out of government, out of favour, out of the shadow Cabinet but not out of the House of Parliament, Henry at 76 still maintains his election, standing up against all comers. He didn't wish to live in squalor but, sidelined, is having a major episode of 'I told you so'. Known for speaking his mind, sometimes a little too frankly, Henry said that his party lost the general election in December because its leadership and, obviously, Prime Minister Andrew Holness in particular, ignored his advice. According to him, the JLP should have tested the waters with the local government election earlier and then gauged its strategy towards the general. In any event, the polls did warn Holness that almost 70 per cent of Jamaicans did not want a Christmas election and history showed that only pre-Christmas December elections ever led to the incumbent winning.

Henry, a man older than the JLP itself, would have greater first-hand familiarity with the biblical stories and references the young Seventh-day Adventist, Holness, would have learnt. He would have been well served to follow the better sense of timing that Jesus showed when he gave his detractors the example of the ass in the hole on the Sabbath.

If Andrew Holness was seen as the next Moses who was to lead the Labourites to the Promised Land, then clearly he did just what Moses did. The problem with the analysis is that few remember that Moses was a phony Egyptian prince whose true colours showed when he could not bear to see his fellow Jew being beaten. Moses intervened and the rest is ... religion. You determine if it qualifies as history.

Nonetheless, while Holness obviously had the sympathy for his brethren being mercilessly beaten by the soldiers of the Queen of Sheba, he, unlike Moses, could do nothing to prevent or stop it. Indeed, inasmuch as he could have delayed the initial battle, the second onslaught was too great for him to bear. Nothing in the Chronicles of Labour will show Holness crossing the orange sea but, like the disobedient Moses, he walked to the edge and saw the Promised Land, but could not cross it.

Holness needs to think seriously about his future and take counsel from the elders. He is young and capable of learning. As the old memory gem says, "He who knows not and knows he knows not, is young ... teach him ... ."

Orville Taylor is a sociologist and senior lecturer at the University of the West Indies. Send comments to columns@gleanerjm.com.