The prince ponders - Holness fixes to fight for his throne 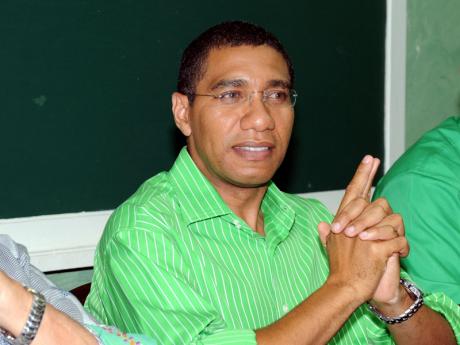 BATTERED AND bruised by two election defeats, Andrew Holness is gearing up for a battle to remain the leader of the Jamaica Labour Party (JLP).

According to Holness, he is ready to rebuild the party even though he may be challenged for the top job at its next annual conference.

"It is the natural state of political parties and, in particular, the Jamaica Labour Party.

According to Holness: "Two defeats for any political party will place the leader of that party under pressure. The natural grieving process is that people are going to be reviewing their loss and trying to lay blame.

"Two defeats, regardless of whether or not the present leader has had anything to do with the long-term state of the party, is irrelevant to those persons who see this as an opportunity to engage in the competitive nature of political parties, which is to compete for leadership," added Holness.

But it is not yet clear from where any challenge will come, as most of the potential challengers have been weakened, based on their performance in the last two national elections.

Already, Dr Christopher Tufton - a leadership aspirant who last year set aside his ambitions and supported Holness - has indicated that he is backing Holness.

"I think that the leader is young. He has just come to the job, and I think that he should be given the time and the opportunity to stamp his authority and his vision for what the party should be, and the country," Tufton told The Sunday Gleaner.

But veteran JLP member Mike Henry, another possible challenger, is not prepared to endorse Holness wholeheartedly.

"The precedent has been set by us to have Mr (Edward) Seaga to continue as leader despite whole heap of defeats," said Henry.

"The Jamaica Labour party has allowed leaders to stay despite defeats. They (JLP members) must now decide if the new generation keeps that old-time thinking."

After being ushered into the seat of party leader following the sudden resignation of Bruce Golding, Holness was touted by political pundits, JLP members and supporters as the 'Moses' who would lead the party to the promise land of electoral success. It was not to be.

Holness' JLP suffered an embarrassing 42-21 defeat in the December 2011 general election. And three months later, the party was wiped out in the local government elections - tasting defeat in all municipal bodies, except Trelawny, which ended in a tie.

In the meantime, Henry, the long-standing JLP chairman who has taken a leave of absence from the post, said Holness should not take all of the blame for the massive election defeats.

"In all of that, we must look ... . Maybe some of his choices were wrong (but) the campaign director (Karl Samuda) must equally be held responsible," Henry said.

He argued that since Golding - in his departure message to the party - said it was time for a younger generation to carry the party forward, that generation "may need to rethink the position".

While the issue about leadership is being raised, Holness believes he is not vulnerable at this time.

"There are many people, their lives will change as a result of the defeat and they might be speaking out of frustration."

According to Holness, as reflected by the two election defeats, the electorate has sent a message to the party "and the message is 'Get your act together'."

"I think all those who would want to lay blame, detract, run ideas for leadership, should really now say, 'Is this the time to be selfish, or is this the time to focus on rebuilding the party?'," Holness said.

The JLP leader said that is something he lives by, and he has always put the party's interest ahead of self-interest.

"I have tried, in the three or four months that I have had leading the party, to be inclusive, in such a way that everyone has an input in the decision-making process."

In the meantime, Holness opines that the lingering issues that resulted from that manner in which he came to power would be addressed with a challenge.

can put questions to rest

"It would not be in the best interest of the party, though you would have to consider that a leadership challenge would put many questions to rest," Holness said.

The JLP leader said his focus at this stage is to rebuild the political party in order to lead the country.

"There are many who are focused on merely leadership at the political party end, and that's the end of it," Holness said.

He has called on all Labouriites to unite in rebuilding the party. "I am not Machiavellian," he said, arguing that he has always tried to reach out to his detractors.

"I believe that all hands should be on deck ... . At the same time, I am not naïve. You will never get everybody supporting you," Holness said.

He added: "My hands are extended, but as Barack Obama says, 'We can't shake hands if you have your fists clenched'.

"I would really hope that those people who are detractors will unclenched their fists and let us hold hands and work together."