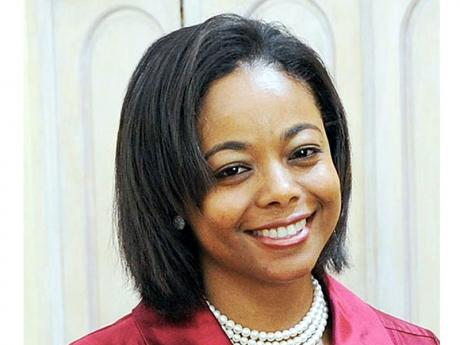 From the judge's bench to a senate seat in the upper house of Parliament, Opposition Senator Marlene Malahoo Forte's next seat will be the broadcaster's chair.

"It (justice) is a high-orienting value. Everyone wants justice but justice means different things to different people," she said. Since the passing of the revered Wilmot 'Motty' Perkins, a full-time show was needed for the time slot. This is her first foray into broadcasting. But why do it?

"I find people who are on the inside don't always speak about what they see. But if you don't use that knowledge that you have gained from the inside, it's a loss," she reasoned.

"Jamaica is a talk culture but more than mere talk, people want to be heard, and they want solutions to the problems facing them," she said. "They yearn for a better understanding, they want systems that work for a man who has no privilege of office." Malahoo Forte said people want issues dealt with in a non-partisan way, and want their dignity as human beings to be recognised. In her previous career, she was also looking for justice, but from within the legal system. She said law is a passion for her and started out as prosecutor, partially because she wanted courtroom experience.

"While I believe everyone is entitled to a defence, defending hardcore criminals didn't sit well with me," she explained. She was in the office of the Director of Public Prosecutions for five years, progressing to the bench where she spent nearly 10 years as a jurist. She came across a plethora of cases.

"There was never a dull moment. It was challenging though. The justice system is very broken. But there are people who thrive in it. That is extremely saddening for me. No case is just 'another' case. People's lives hang in the balance while they seek resolution," she said. So she decided that while adjudicating, she would spend time trying to fix the system. Her efforts were not always welcomed.

"Changes result in winners and losers, and those who stand to lose are going to fight tooth and nail to maintain that status quo. So they attack the messenger in order to discredit the message," she said. Her focus was on the backlog of cases (some first called up in the 1970s) but also addressed issues like the lack of technology.

"Exercising leadership can be a lonely place. If you are prepared to stand up for what you believe is right, then many people will admire it...but a lot of others will resent it because you're showing them up." She developed a keen interest in the policy side of the machinery of government and after a sabbatical, was offered a chance to serve in the Senate.

Growing up in Paul Island, Westmoreland, and attending Manning's School in Savanna-la-Mar, her ties to the parish led her to run in last year's general election.

"I had no illusions as to the difficulty of that seat. I entered to win though and what I discovered... is that the electoral system is also broken, in spite of what we have achieved. There would have been no defeat for me regardless of the outcome of the election," she said. She said she noted and pointed out numerous irregularities during the voting process. A bomb threat and the shooting at a Jamaica Labour Party rally (which was ruled gang-related) are things she will not forget. But she feels these occurrences go back to the need for justice, both the show and the right.

"And we talk about sense of fair play? We haven't even begun to look at this thing! This thing we call justice? It's serious business!" she said.

Malahoo Forte has been learning the nuances of broadcasting but said she has no fear of this new avenue of her life. She also said she knows she has great support from those close to her, including her husband Justice Ian Forte.

"He's a constant mainstay in terms of counsel and advice. You have to have a core of people who will provide support when everything else around you is chaotic," she said. "And it's always good to get advice." She said there was a need to reorient this country and 'Justice' would try to do that. Malahoo Forte said Justice will be very informative.

"I think there's a need for people to know the laws of the country and understand the institutions ... that are there to protect their rights," she said. The show will also examine why there is such a sense of injustice in the land and why justice is the most consistent cry of the people. She said there are a number of ideas about how the show will evolve.

"This programme is going to be, in addition to looking at the issues from a new and different perspective, it's also going to seek to find a resolution and suggest solutions that are workable. So it's just not another talk show," she promised.