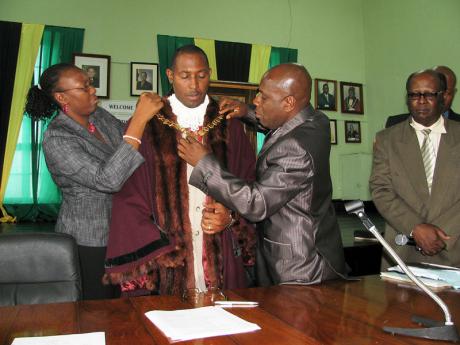 New Mayor of Falmouth Garth Wilkinson is assisted with his robe by outgoing Mayor Collen Gager and a parish council staffer during the recent swearing-in ceremony in Trelawny. - Photo by Ruddy Mathison

With eight of the nine divisions shared evenly between the Jamaica Labour Party (JLP) and the People's National Party (PNP), plus one Independent member, the Trelawny Parish Council could be a most interesting place in coming months.

But if there is one person who could walk through the raindrops and keep the council running smoothly it is the PNP's Garth Wilkinson, who has been elected mayor.

The 44-year-old Wilkinson has been married for 20 years and has two adult children.

He attended the Herbert Morrison Comprehensive High School and then the Montego Bay Community College before going to Cornell College in New York to complete his qualification as an accountant.

This is Wilkinson's third term in the Trelawny Parish Council, having been elected to represent the Falmouth division in 2007.

Living in the small coastal district of Comfort Hall, some four miles west of Falmouth, Wilkinson said he entered representational politics to make a difference.

He identified the expansion of the Bend Down Market in Falmouth and making the Falmouth pier a part of the town as priority areas during his tenure.