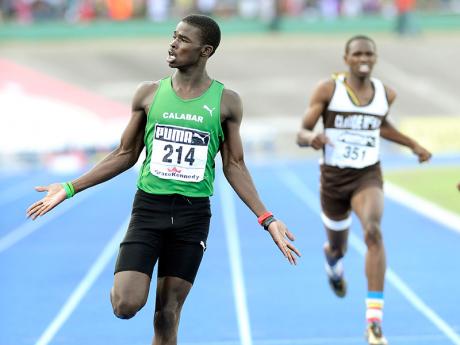 Calabar High celebrated their centenary in style last night as the Mortimer Geddes trophy returned to Red Hills Road after a three-year hiatus.

The green-and-black-clad boys' school muscled their way to a breath-taking win at this year's Inter Secondary School Sports Association (ISSA)/GraceKennedy Boys and Girls' Athletics Championships inside the National Stadium.

It was a title race that will enter the annals of Champs history as one of the most intriguing ever; an intense battle between the championships' most-storied institutions, neither willing to back down, both determined to walk away with the spoils.

Calabar, 287.5 points, claimed their 22nd hold on the title, their latest coming 82 years since their maiden triumph in 1930.

As predicted, it came down to the relays with KC winning two of the five contested. A mishap in the Class Two 4x100m by the Calabar team on the first exchange, pulling KC, 41.62, within three points for a brief period, after they managed a second-place finish behind record-breaking Jamaica College, 40.75.

It was the high point of a KC offensive that saw them claw their way back from a deficit that was, at one point, as high as 45 points in the afternoon.

With memories of 2009 - when Calabar finished 1.5 points behind KC and a year later when a string of mistakes saw them throw away yet another title, quickly setting in the stands, the green-and-black army pulled a rally of their own.

Not close enough to the other top guns this year, Wolmer's got something to cheer about when their standout athlete Christoffe Bryan broke the Class Two high jump record with a 2.10m mark, bettering Germaine Mason's 2.09m which was set in 1999.

Munro's Delano Williams wrapped up the Class One sprint double following up on Friday night's 100m success with a 21.18 win in the 200m.

Calabar's Michael O'Hara was another double winner this year, adding the Class Two 200m crown to the 110m hurdles title he won earlier in the afternoon.

"This is great for Calabar," said O'Hara of his win. "I had to come out here and do this for my school, family and coaches."

Whatever was said to the Calabar boys overnight seemed to work early on as the boys from Red Hills Road got off to a ferocious start, dominating the 400m, winning two of the three finals contested in the afternoon sun.