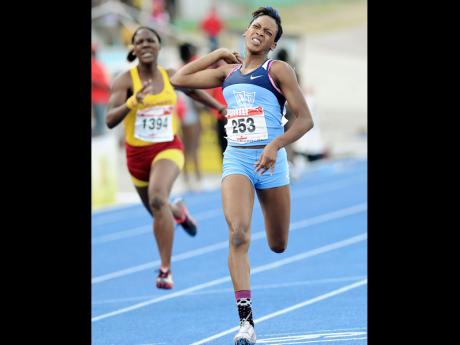 Edwin Allen High led from start to finish to capture their first ever girls' title in grand style at the 2012 staging of the Inter-Secondary Schools Sports Association (ISSA)/GraceKennedy Boys and Girls' Athletics Championships at the National Stadium last night.

The girls' contest was a one-sided affair, as the Clarendon-based school amassed a whopping 351 points to dethrone nine-time defending champions Holmwood Technical on 227. The top five was rounded off by St Jago (174), Vere Technical (147) and Hydel (113).

Michael Dyke, who has been at the helm of Edwin Allen's track programme for more than 20 years was overjoyed.

"I am very happy at the moment, elated. I really can't put into words how I feel right now," Dyke managed. "Edwin Allen is my alma mater and my main goal was to put the school on the map where track and field is concerned and then move towards the championships," he added.

Edwin Allen's victory was formalised before the running of the sprint relays.

The impressive Shauna Helps of Wolmer's completed the Class Three sprint double, as she added the 200m to the 100m title she won on the previous day. She stopped the clock at 24.21 seconds, running against a minus 3.5 headwind. Holmwood's Shanta Deer was second in 24.72 while St Jago's Natallia Whyte (24.85) was third.

Tiffany James of Papine won her school's first gold medal at Champs, as she stopped the clock at 54.93, to take the Class Three 400m. Hydel's Semoy Hemmings (55.40) and Holmwood's Shenice Cohen (55.89) accounted for the other medals.

The 15-year-old James was not finished there as she returned an hour later in the 800m Class Two to bravely fight off defending champion, Lisa Buchanan, who was losing her first final at Champs. James crossed the line in 2:11.31 to Buchanan's 2:11.90, with St Elizabeth's Junelle Bromfield (2:13.86) taking bronze.