Powell: I am ready, no indoor disappointment 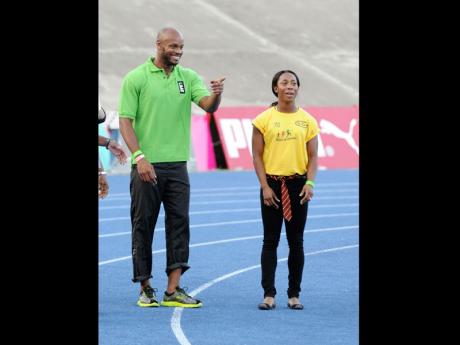 Asafa Powell and Shelly-Ann Fraser-Pryce at the opening ceremony for the ISSA/GraceKennedy Boys and Girls' Championships at the National Stadium on Friday. - Ricardo Makyn/Staff Photographer

Former 100m world record holder Asafa Powell says he is fit and ready to get his season started, and has also played down talks of him being disappointed at missing out on competing at the IAAF World Indoor Championships in Istanbul, Turkey, last month.

Powell, who also has World Championships and Olympic Games relay gold medals and world records, a Commonwealth Games gold medal and two World Championships 100m bronze medals to his name, cannot wait to get started, and is expecting to get a 400m under his belt for strength conditioning, before lining up at the Jamaica Invitational on May 5, where he will face one of Usain Bolt or Yohan Blake in either the 100m or 200m.

"Everything is going well, I am training very well, I am confident and happy with the way I am training right now," Powell told The Sunday Gleaner. "There are a lot of good things to come from me this year.

"I am fit and ready this year. I still haven't done a 400m and I have that to run but I am ready to go. It's a big year and the Olympics is something that I am really looking forward to," Powell added, before turning his attention to the World Indoor Championships.

The powerful sprinter had competed on the indoor circuit for the first time in eight years and was expected to be one of the country's two representatives in the 60m in Istanbul.

However, Powell's 6.50 season's best was slower than MVP clubmate Nesta Carter's 6.49 and Lerone Clarke's national record, 6.47, and as a result did not make the trip.

However, there are no regrets as far as he is concerned, as he believes he was able to better prepare himself for the season's main objective, the Olympic Games in London this summer.

Jamaica's Olympic trials will take place June 28-July 1 and Powell is one of the favourites to take one of the three 100m spots up for grabs, along with Olympic champion and world record holder Usain Bolt, World champion Yohan Blake, and Carter.