Aussies are back and looking set to win 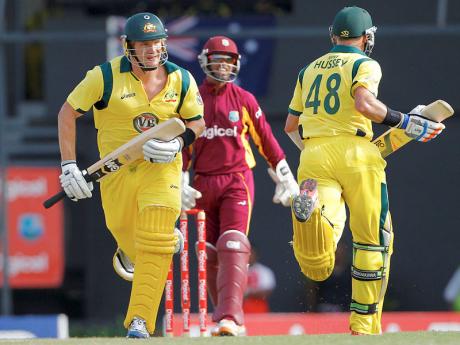 Tony Becca FROM THE BOUNDARY

How can we forget that glorious day in March 1955, when Ian Johnson led the first Australians to visit the West Indies in the first Test match at Sabina Park, or for that matter Neil Harvey's innings of 133 and Keith Miller's 147, Clyde Walcott's 108 and Collie Smith's debut knock 104, and later on, the fact that Harvey and Miller, Ron Archer and Richie Benaud all scored centuries in one match, and that Walcott stroked five centuries, including two in one Test match on two occasions.

There were also the seventh-wicket partnership between captain Dennis Atkinson and Clairmonte DePeiza when the West Indies, reeling at 147 for six replying to 668, recovered to 494 for seven after a stand of 347, the excitement of the highest total between the two teams, Australia's mammoth 751 for eight declared at Sabina Park, and years later, the disappointment of the lowest total between the two teams, 51 by the West Indies at Queen's Park Oval in 1999.

Down the years there have been many more things to fill the memory.

And for 31 years, from 1978 to 2009, the two teams shared the dominance of world cricket before Australia knocked the West Indies off the pedestal and England did likewise to Australia.

Australia are not as strong as during the days of players like Matthew Hayden, Adam Gilchrist, Glen McGrath and Shane Warne but they are a fighting team, a team with a good mix of experience and youth, of experience in batsmen Ricky Ponting, captain Michael Clarke, Michael Hussey, and Shane Watson, and fast-bowler Peter Siddle plus fast-bowlers Ben Hilfenhaus and Ryan Harris, and of youth in the likes of batsmen David Warner and Ed Cowan, fast-bowlers, the big-swinging 22-year-old Mitchell Starc and the super promising 21-year-old James Pattinson, and wicketkeeper/batsman, Matthew Wade.

The West Indies, on the other hand, are definitely not as strong as in the days of players such as Viv Richards and Gordon Greenidge, Andy Roberts, Michael Holding, Colin Croft, and Joel Garner, neither are they as strong as in the days of Lara and Richie Richardson, Ambrose and Courtney Walsh, and up to a few months ago, they were not even expected to make a fight of it.

By their play in India and following the arrival of Australia in the West Indies and the West Indies' performance in the one-day internationals and in the T20 matches, however, many West Indians, and others, gave them a chance, if not to win, at least to put a good fight.

The fans saw a team in the field, including wicketkeeper Carlton Baugh, as good as any; they saw a team with bowlers giving everything they had for the cause; they remembered the promise and class of Darren Bravo they recalled the run production of Kirk Edwards; they thought of the talent of Marlon Samuels, and they remembered the skill of Shivnarine Chanderpaul.

They also remembered the possibilities of all-rounder Dwayne Bravo, and the pace of Fidel Edwards and Kemar Roach - who all but destroyed Ponting on the last tour to Australia. they recalled the accuracy of Ravi Rampaul and the control leg-spin of Devendra Bishoo, and they welcomed the two-way spin of Sunil Narine.

The fans were also impressed with the hitting of Kieron Pollard, Andre Russell and captain Darren Sammy and their brilliant fielding.

The one problem with that Test team would be the selection of the captain. The Test team would need only one all-rounder, and to select Sammy over Dwayne Bravo, just would not seem right.

The people were thinking of a team, all things being equal, of Chris Gayle, Adrian Barath, Edwards, Darren Bravo, Samuels, Chanderpaul, Baugh, Roach, Edwards, Narine, and Bishoo with Gayle and Samuels to help with the bowling, or, with Samuels finding runs difficult to come by, Dwayne Bravo, with his medium-paced bowling, to replace Samuels.

That team, on a good day, could fight off the Aussies and possibly upset the men from Down Under, especially on West Indian pitches.

The problem, however, is that because of the Indian Premier League the Windies will not be at full strength, as they may not be for some time to come, or for a long, long time to come.

What it all means is that where as once upon a time whenever the West Indies tackled Australia it was cricket at its best, it was the best against the best. This time, however, and may be for all times, forever after, it will not be the same, and the West Indies seemed destined to suffer more.